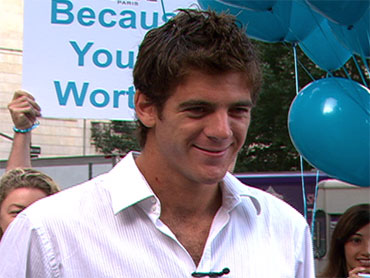 Juan Martin del Potro collapsed and cried on the hard courts of the U.S. Open as he realized he was the new U.S. Open Men's champion.

In a four-hour battle, he shocked the tennis world by defeating Roger Federer, the five-time U.S. Open champion and current No. 1 seed.

On "The Early Show" Tuesday, the 20-year-old said he played the match of his life Monday night, and everything was "perfect."

"My favorite tournament, my favorite stadium, the best ever in my career," he said.

The Open win was del Potro's first Grand Slam victory. Prior to this match, he played Federer six other times and never won.

What was different this time?

Del Potro said everything was different. And though he had never played in a Grand Slam final, he said he was gearing up to play "amazing tennis," and added that's what he did.

"I played so focused (on) every point," he said.

Del Potro also defeated the No. 2 seeded player, Rafael Nadal, in the semifinals -- a in which where Nadal, "Early Show" substitute co-anchor Jeff Glor remarked, was handled relatively easily by del Potro.

Del Potro said his tennis reached a new level at this year's Open. However, he added, he needs to improve many things in his game, though he didn't offer specifics.

Del Potro is the second Argentine to win the U.S. Open. He said on "The Early Show" his family and country are waiting for him "with sensation."

His compatriot, Guillermo Vilas, the first Argentine champion, who won in 1980, was at the final. Del Potro said he spoke with Vilas after the match and had "good relations" with him.

"(It's) so great to Argentina to win," del Potro said.

Del Potro said he will return to Argentina on Wednesday.

But how did the champion feel Tuesday morning?