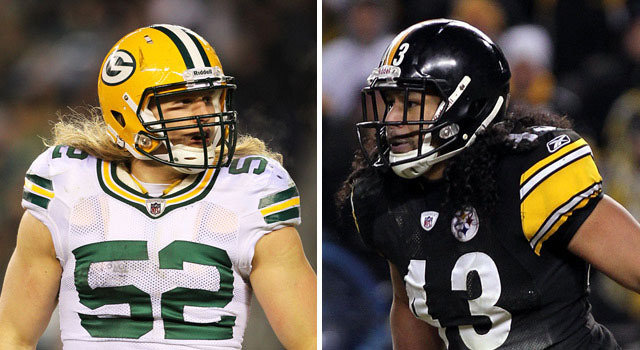 The Steelers have the 2010 Defensive Player of the Year.

The Packers have the award's runner-up - and a nose tackle so dominant that he has a burger named after him.

So it stands to reason that a defender could easily walk away with the Super Bowl MVP when the teams clash this Sunday in Texas, right?

Only seven times in Super Bowl history has a defensive player won the MVP.

The reasons are obvious - yet still confounding.

Quarterbacks get all the glory (23 Super Bowl MVP's) while running backs and wide receivers (13 awards total) score all the touchdowns.

But look at the facts. The Steelers and Packers finished the season ranked first and third, respectively, in total defense (first and second in rushing defense).

Pittsburgh safety Troy Polomalu edged out Green Bay linebacker Clay Matthews for the 2010 Defensive Player of the Year award. (That's the third year in a row that a Steeler or Packer has won the award).

In their respective conference title games, it was both teams' defenses that scored what would prove to be the decisive touchdowns.

Ah, but the NFL is a quarterback's league - and the Super Bowl is where QB's write their legacy. And Pittsburgh and Green Bay just happen to boast two of the best in the game. So barring a 6-3 final score or a game featuring a dramatic defensive touchdown, expect Ben Roethlisberger or Aaron Rodgers (or one of their wide receivers) to take home the hardware.

A journey from prisoner to marathoner
Stephen Smith