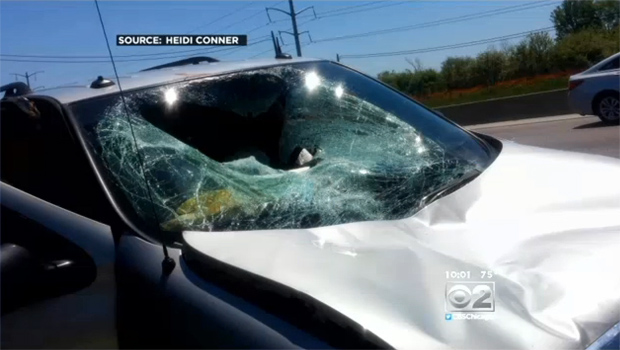 A deer slams through the windshield of minivan filled with kids, and everyone walks away OK.

That's the story from CBS Chicago, which spoke to the mom behind the wheel.

Heidi Conner and her four kids made it through an eight-hour road trip with only one stop -- until something stopped them.

"I'm driving, everything was fine. Boom, and I have a deer lying next to me in my car," she says.

A full-sized female deer slammed through the front of Heidi's windshield as she cruised at more than 70 mph on westbound Interstate 90 near Barrington, a suburban village on the outskirts of Chicago.

It's as if the animal fell from the sky, she says -- which apparently is not too far off.

Illinois Police State Trooper Justin Novarro was first on scene and says a witness told him the deer jumped or fell off the Illinois 72 overpass onto I-90.

"Never in my career have I seen anything like this," he says.

Despite the impact, Conner steered the van through three lanes of traffic to get to safety.

The kids weren't hurt at all, and doctors say Conner only has a sore shoulder and a few bumps and bruises.

Not bad, when you consider what could've been.

"I believe God was with me the whole time -- he protected me, he preserved me for a reason," she says.

Conner says the family only had liability insurance on the car, meaning she'll get no money from her insurance company. The car is totaled.