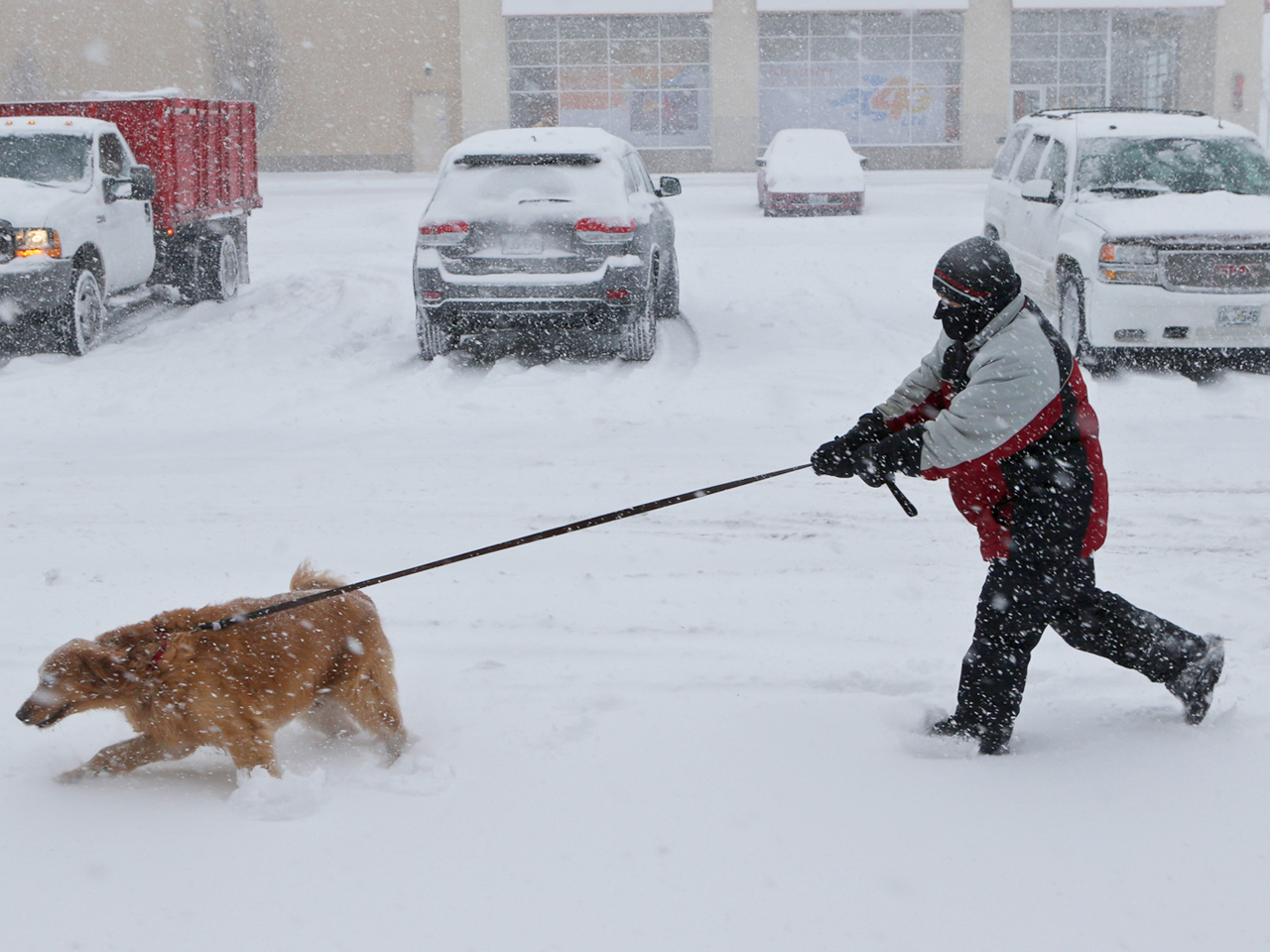 CHICAGO - Snow-covered roads and high winds created treacherous driving Sunday from the Dakotas to Michigan and Missouri as residents braced for the next round of bad weather: dangerously cold temperatures that could break records across much of the nation.

Temperatures were being suppressed by a "polar vortex," a counterclockwise-rotating pool of cold, dense air that will affect more than half of the continental U.S. throughout Sunday and into Monday and Tuesday, with wind chill warnings stretching from Montana to Alabama.

The forecast is extreme: 25 below zero in Fargo, N.D., minus 31 in International Falls, Minn., and 15 below in Indianapolis and Chicago. Wind chills - what it feels like outside when high winds are factored into the temperature - could drop into the negative 50s and 60s. Northeastern Montana was warned Sunday of wind chills up to 59 below zero.

For the first time in 20 years, all Minnesota schools will close on Monday, Jamie Yuccas with CBS station WCCO in Minneapolis reported. Several cities and districts in Wisconsin, Illinois, Indiana and Iowa, among others, also called off classes. Chicago officials initially said school would be in session for the nation's third-largest district, but later reversed course and told students to stay home.

Several Midwestern states were walloped by up to a foot of new snow on Sunday. Five to 9 inches had fallen in the Chicago area by Sunday afternoon, while the St. Louis area had about a foot of snow and northern Indiana had at least 8 inches. Central Illinois was bracing for 8 to 10 inches, and southern Michigan could see up to 15 inches.

Officials closed several Illinois roadways because of drifting snow, and warned residents to stay inside. Roads in the Midwest were particularly dangerous, and officials in Missouri warned it was too cold for rock salt to be very effective.

Authorities also urged residents to check on elderly and disabled relatives and neighbors.

In Chicago, temperatures were expected to bottom out around minus 15 overnight, likely setting a daily record, National Weather Service meteorologist Ed Fenelon said. Earlier Sunday, temperatures sank to 20-below and colder in northern Minnesota and Grand Forks, N.D.

Despite the dangerous cold, Green Bay Packers fans bundled up and turned up at Lambeau Field, where the San Francisco 49ers beat the Packers 23-20 in the NFC wild-card game Sunday. During its telecast, Fox reported the temperature dipped to 2 degrees and the wind chill was minus-11.

"It is not that cold, it is all mental," 49ers quarterback Colin Kaepernick said. "Just look at Bow (All-Pro linebacker NaVorro Bowman) with no sleeves."

It hasn't been this cold for almost two decades in many parts of the country. Frostbite and hypothermia can set in quickly at 15 to 30 below zero.

Lorna West, a 43-year-old student and consultant from Columbus, Ohio, said she doesn't believe people unaccustomed to such weather are ready for what's coming.

A Chicago native, she said thermal underwear, lots of layers and "Eskimo coats" with zipped hoods to block the wind were the norm growing up.

In Michigan, residents jammed stores to stock up on supplies.

"I made my husband go grocery shopping last night," said Kim Tarnopol, 46, of the Detroit suburb of Huntington Woods. Tarnopol was picking up cold medicine Sunday for her daughter Emma at a CVS in nearby Berkley, Mich.

Travel problems started early Sunday. In New York City, a plane from Toronto landed at Kennedy International Airport and then slid into snow on a taxiway. No one was hurt, though the airport temporarily suspended operations because of icy runways.

Southern states are bracing for possible record temperatures, too, with single-digit highs expected Tuesday in Georgia and Alabama.

Temperatures are expected to dip into the 30s in parts of Florida on Tuesday. But Florida Citrus Mutual spokesman Andrew Meadows said it must be at 28 degrees or lower four hours straight for fruit to freeze badly.

In western Kentucky, which could see 1 to 3 inches of snow, Smithland farmer David Nickell moved extra hay to the field and his animals out of the wind. He'd also stocked up on batteries and gas and loaded up the pantry and freezer. The 2009 ice storm that paralyzed the state and knocked out power to hundreds of thousands of people is fresh in his mind.

"We are hoping this isn't going to be more than a few days of cold weather, but we did learn with the ice storm that you can wake up in the 19th century and you need to be able to not only survive, but be comfortable and continue with your basic day-to-day functions," Nickell said.

In Mount Prospect, Ill., Steve White spent part of Sunday raking his roof with a specially made pole to prevent icicles as he prepares for a trip to Costa Rica in the coming days. He also installed a thermostat that directly faces a window, so a neighbor can check to make sure his furnace is working.