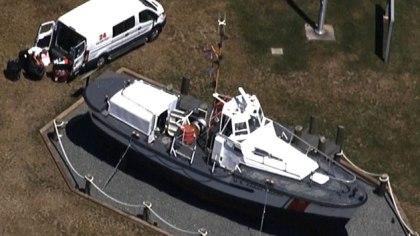 CHATHAM, Mass. -- Authorities have found a decomposed body inside a closed compartment aboard a retired Coast Guard boat in Massachusetts.

The preliminary investigation has not revealed evidence of foul play.

Family members say the body has been identified as 24-year-old Matt Amsler who went missing in October, CBS Boston reports.

Toni Runci updated a GoFundMe page for Amsler on Monday.

"It saddens me to share that today we found Matthew. He was located this morning in Chatham. He had crawled into an airtight space on a boat for shelter from a recent storm, and fell peacefully asleep and ran out of oxygen. This, of course, was not the ending we wished or hoped for," wrote Runci.

The 44-foot motor lifeboat was not in the water but was on display on the lawn at Coast Guard Station Chatham.

A Coast Guard spokesman says the boat was retired in 2009 after 46 years of service.