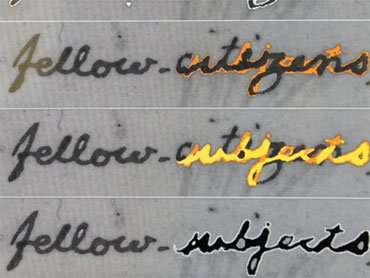 Preservation scientists at the Library of Congress have discovered that Thomas Jefferson, even in the act of declaring independence from Britain, had trouble breaking free from monarchial rule.

In an early draft of the Declaration of Independence, the famous founder wrote the word "subjects," when he referred to the American public. He then erased that word and replaced it with "citizens," a term he used frequently throughout the final draft.

The Library released news of the struck word for the first time on Friday, ahead of the U.S. Independence Day holiday weekend.

Fenalla France, a research chemist at the Library, said her lab made the discovery last year by using hyperspectral imaging, using a high resolution digital camera that compiles a series of images to highlight layers of a document. Some of those invisible layers - like erased text and even fingerprints - pop into view on a computer screen.

In switching from "subjects" to "citizens," France said it appears Jefferson used his hand to wipe the word out while the ink was still wet. A distinct brown smudge is apparent on the paper, although the word "subjects" is not legible without the help of the digital technology.

"This has been a very exciting development," France said, calling the findings "spine-tingling."

"It shows the progress of his mind. This was a decisive moment," Billington said. "We recovered a magic moment that was otherwise lost to history."

Accompanied by police escort, the document was unveiled outside its protective case for the first time in 15 years on Friday morning for an additional round of hyperspectral imaging. It normally can only be viewed through a 130-pound oxygen-free safe.

Donning a pair of white researchers' gloves, Maria Nugent, director of the Library of Congress' top treasures collection, slowly lifted a piece of off-white corrugated cardboard to reveal the rough draft of the Declaration, which includes handwritten corrections by founders John Adams and Benjamin Franklin.

"That's a pretty good editorial committee," said Billington, who was present for the procedure.

The rough draft was written on two sheets of white legal-sized paper, on both the back and front sides of the sheets.

The document was returned to the library's vault on Friday after the testing.