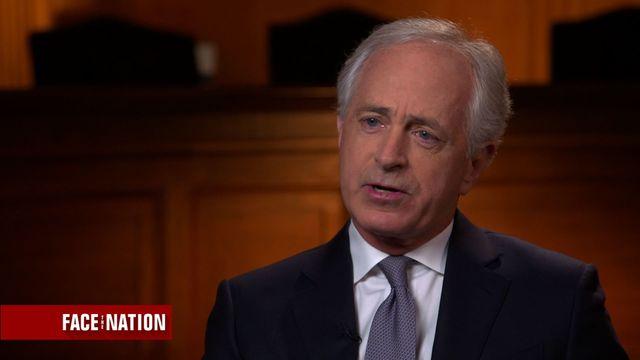 In September, Sen. Bob Corker, R-Tennessee, Chairman of the Foreign Relations Committee, announced he would not seek re-election in 2018.

But for a brief time in February, he seemed to be re-evaluating.

"I spent a couple weeks thinking about it," Corker said in an interview this week with "Face the Nation" moderator Margaret Brennan. "And, you know, it was very therapeutic…I just felt that the decision I made in September was the right one."

Prior to his announcement in September, Corker and President Trump traded barbs. Corker was once a White House ally, but in mid-2017 he criticized Mr. Trump's handling of the White House and of the Charlottesville protests. Mr. Trump responded on Twitter, claiming Tennessee was not happy with Corker's performance in the Senate.

Corker said the two have since repaired their relationship.

"I don't think people realize that we never stop talking," he said, "There has been a lot of progress made."

Still, Corker feels two terms in the Senate is the right amount of time there and argued people used to appreciate shorter tenures.

"It used to be in our country that people cherished the fact that people would run for two terms and leave. Right? It was interesting that when I announced that I was gonna actually do what I said I was gonna do while I campaigned, I got no credit for it," he said.

He has few plans for life after the Senate and has some anxiety about not working for the first time since the age of 13. He is sure, however, that there's one place he won't be.

"You won't see me around here," he said of Capitol Hill.

He hopes to play a constructive role in another industry.