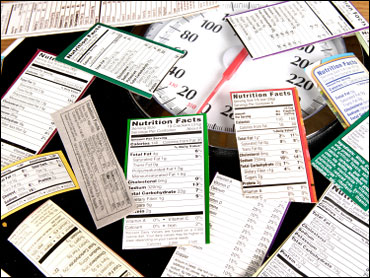 The ingredients of packaged foods are frequently confusing and hard to pronounce.

They're listed on the labels on the packages.

And just because an additive is artificial doesn't necessarily mean it's bad for you. Then again, some might be.

On The Early Show Tuesday, registered dietitian Keri Glassman went through the fine print on some of the labels, and told which additives are probably safe and which ones you might want to think twice about.

What is it?: Highly stable crystalline sweetener with a chemical structure similar to saccharine
What is it used for?: Artificial sweetener. Calorie-free, much sweeter than sughar, used in its place
Where to find it: Some syrups, some hot cocao, chewing gum, sugar-free drinks
The verdict: Research "very inconclusive," Glassman says. "Some studies have suggested that it may cause cancer. But again, the research is really inconclusive, so if that's a concern of yours, you may want to avoid it."

What is it? Fat-soluble compound primarily used to prevent food spoilage.
What is it used for? To prevent rancidity of oils.
Where to find it: In high-fat foods such as potato chips and shortening, also found in chewing gum and cereal. BHT is also used in jet fuels, rubber, embalming fluids.
The verdict: Found to increase cancer in animal studies, though decreased risk in others; research inconclusive. Use is unnecessary, because it's easy to replace with surely safe substitutes. So, says Glassmna, "If it's a concern of yours, read the ingedients carefully, and you might want to find an alternative product that doesn't use it and uses something else. But again, the research is still inconclusive." It's usually replaced with BHA, which is also able to stabilize free radical proliferation; however, it hasn't been studied enough to determine its safety.

What is it? Both are froms of fiber and add bulk to food.
Dextrins are carbs produced by the chemical breakdown of starch. Maltodextrin is usually derived from rice, corn, or potato, and sometimes wheat.
Inulin: Group of naturally-occurring polysaccharides (sugars) produced by many types of plants.
What is it used for? Maltodextrin: Thickening agent and sweetener. Inulin: Fat and sugar substitute and fiber source.
Where to find it: Maltodextrin: Cakes, muffins, salad dressing, instant pudding, canned fruit.
Inulin: Margarine, baked goods, fillings, frozen desserts, cereals, granola bars, yogurt, whole wheat breads and tortillas.
The verdict: Maltodextrin: Safe; may help to lower blood sugar levels. Avoid if you have Celiac disease. Inulin: Safe; also stimulates growth of friendly bacteria in the large intestine, adds soluble fiber to food, and doesn't raise blood sugar levels.

What is it? Accounts for nearly 80 percent of proteins in milk and cheese.
What is it used for? Thickening and whitening agent.
Where to find it: Coffee creamer, ice cream, ice milk, and sherbet. Also can be listed as sodium caseinate, calcium caseinate, or milk protein
The verdict: Absolutely safe; BUT caution if allergic to milk proteinss

Kicked Out Of Pre-K?