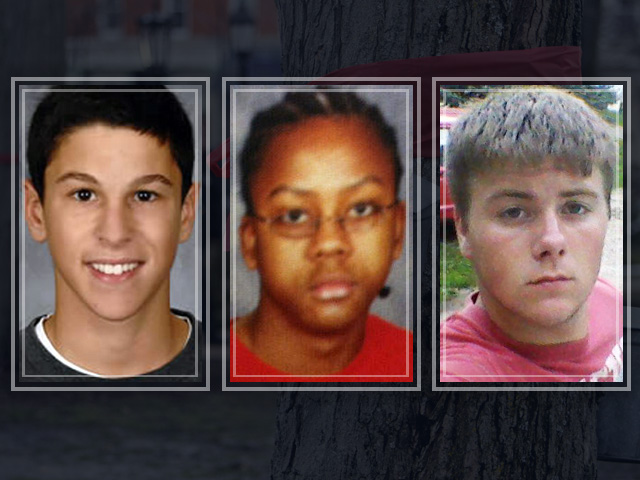 CHARDON, Ohio - A third student died Tuesday morning in the suburban Cleveland high school shooting that left two other students dead when a teenager allegedly opened fire in the cafeteria on Monday.

Demetrius Hewlin, a student from Chardon High School, and who was previously listed in critical condition, passed away, according to hospital MetroHealth System.

His family released the following statement: "We are very saddened by the loss of our son and others in our Chardon community. Demetrius was a happy young man who loved life and his family and friends. We will miss him very much but we are proud that he will be able to help others through organ donation. We ask that you respect our privacy during this difficult time."

Shaken residents offered condolences and prayers to the families of those killed and wounded at 1,100-student Chardon High School in suburban Cleveland. All three of the dead were students, as are the two people wounded.

"This gets more tragic, the whole area is suffering, our prayers go up to God to give all strength, healing and closure," said one of hundreds of Facebook postings on a memorial page.

The community offered grief counseling to students, staff and others at area schools.

"We're not just any old place, Chardon," Chardon School Superintendent Joseph Bergant II said. "This is every place. As you've seen in the past, this can happen anywhere, proof of what we had yesterday."

News of Hewlin's death came after another student, Russell King Jr., was declared brain dead, authorities said Tuesday. The Cuyahoga County Medical Examiner's Office received the word about King Jr. just before 1 a.m. Tuesday, office administrator Hugh Shannon said in a statement. It was unclear whether King remained on life support; the statement referred to him as both deceased and brain dead.

"The cause and manner of death of this case are under on-going investigation and will be released upon completion," Shannon said in a statement. A spokeswoman at MetroHealth System said Tuesday morning that no information on his condition was available.

King, 17, was one of five students injured when a suspect identified by a family lawyer as TJ Lane began shooting at Chardon High School Monday morning. King was studying alternative energy at nearby Auburn Career Center and like the others who were shot was waiting for a bus for his daily 15-minute ride to the center. Student Daniel Parmertor died hours after the shooting.

Law enforcement sources told CBS News that Lane -- who says he was a victim of bullying -- warned his friends about his plans two days in advance. Sources said the suspect is cooperating with authorities.

At a juvenile court hearing Tuesday afternoon, a prosecutor said that Lane didn't know his victims and chose them randomly.

Lane's face twitched lightly while the prosecutor recounted the attack, and he sniffled and half-closed his eyes as he walked out of the room with deputies.

Judge Timothy Grendell ordered the boy, who is considered a juvenile, held for at least the next 15 days. Prosecutors have until March 1 to charge him.

"Given his age and the nature of the allegations against him," said CBS Radio News legal analyst Andrew Cohen, "he'll almost certainly end up being tried as an adult -- and jurisdiction over the case will soon transfer over to adult court. Clearly the judge who presided over this early hearing was under that impression."

He added: "Even though Ohio has a death penalty, Lane would not be eligible for capital punishment if he were to be convicted of murder here -- the Supreme Court precluded that sentencing option for people who are under 18 when they murder.

Of those incidents where another person knew about the attack in advance, 93 percent of those people were the attacker's friend, schoolmate or sibling.

A student who saw the attack up close said it appeared that the gunman targeted a group of students sitting together and that the one who was killed was gunned down while trying to duck under the cafeteria table.

Lane's family is mourning "this terrible loss for their community," attorney Robert Farinacci said in a statement.

FBI officials would not comment on a motive. And Police Chief Tim McKenna said authorities "have a lot of homework to do yet" in their investigation of the shooting, which sent students screaming through the halls at the start of the school day at 1,100-student Chardon High.

An education official said the suspected shooter is a Lake Academy student, not a student at Chardon High. Brian Bontempo declined to answer any questions about the student. Bontempo is the superintendent of the Lake County Educational Service Center, which operates the academy.

The alternative school in Willoughby serves 7th through 12th grades. Students may have been referred to the school because of academic or behavioral problems.

The FBI said the suspect was arrested near his car a half-mile from Chardon. He was not immediately charged.

CBS News correspondent Bob Orr reported that "Lane has told investigators he stole the gun from his uncle, who had obtained it legally. Sources say there were lots of legal guns available. About two dozen weapons were discovered in FBI searches of Lane's relatives homes."

Teachers locked down their classrooms as they had been trained to do during drills, and students took cover as they waited for the all-clear in this town of 5,100 people, 30 miles from Cleveland. One teacher was said to have dragged a wounded student into his classroom to protect him. Another chased the gunman out of the building, police said.

Fifteen-year-old Danny Komertz, who witnessed the shooting, said Lane was known as an outcast who had apparently been bullied. But others disputed that.

"Even though he was quiet, he still had friends," said Tyler Lillash, 16. "He was not bullied."

Farinacci, representing Lane and his family, told WKYC-TV that Lane "pretty much sticks to himself but does have some friends and has never been in trouble over anything that we know about."

Long before official word came of the attack, parents learned of the bloodshed from students via text message and cellphone and thronged the streets around the school, anxiously awaiting word on their children.

"I looked up and this kid was pointing a gun about 10 feet away from me to a group of four kids sitting at a table," Komertz said. He said the gunman fired two shots quickly, and students scrambled for safety. One of them was "trying to get underneath the table, trying to hide, protecting his face."

Slain student Daniel Parmertor was an aspiring computer repairman who was waiting in the cafeteria for the bus for his daily 15-minute ride to a vocational school. His teacher at the Auburn Career School had no idea why Parmertor, "a very good young man, very quiet," had been targeted, said Auburn superintendent Maggie Lynch.

Officers investigating the shooting blocked off a road in a heavily wooded area several miles from the school. Federal agents patrolled the muddy driveway leading to several spacious homes and ponds, while other officers walked a snowy hillside. A police dog was brought in. It wasn't clear what they were looking for.

Teacher Joe Ricci had just begun class when he heard shots and slammed the door to his classroom, yelling, "Lockdown!" to students, according to Karli Sensibello, a student whose sister was in Ricci's classroom.

A few minutes later, Ricci heard a student moaning outside, opened the door and pulled in student Nick Walczak who had been shot several times, Sensibello said in an email. Ricci comforted Walczak and let him use his cellphone to call his girlfriend and parents, Sensibello said. She said her sister was too upset to talk.

Heather Ziska, 17, said she was in the cafeteria when she saw a boy she recognized as a fellow student come into the cafeteria and start shooting. She said she and several others immediately ran outside, while other friends ran into a middle school and others locked themselves in a teachers' lounge.

"Everybody just started running," said 17-year-old Megan Hennessy, who was in class when she heard loud noises. "Everyone was running and screaming down the hallway."

Farinacci said Lane's family was "devastated" by the shootings and that they offered "their most heartfelt and sincere condolences" to Parmertor's family and the families of the wounded students.

"This is something that could never have been predicted," Farinacci told WKYC-TV.

Rebecca Moser, 17, had just settled into her chemistry class when the school went into lockdown. The class of about 25 students ducked behind the lab tables at the back of the classroom, uncertain whether it was a drill.

Text messages started flying inside and outside the school, spreading information about what was happening and what friends and family were hearing outside the building.

"We all have cellphones, so people were constantly giving people updates — about what was going on, who the victims were, how they were doing," Moser said.

The school had no metal detectors, but current and past students said it had frequent security drills in case of a shooting.

Anxious parents of high school students were told to go to an elementary school to pick up their children.

Joe Bergant, Chardon school superintendent, said school was canceled Tuesday and grief counselors would be available to students and families.

"If you haven't hugged or kissed your kid in the last couple of days, take that time," he said.

On its Web site, Chardon Schools announced that their buildings were closed Tuesday; students and parents are invited to return to their schools on Thursday.