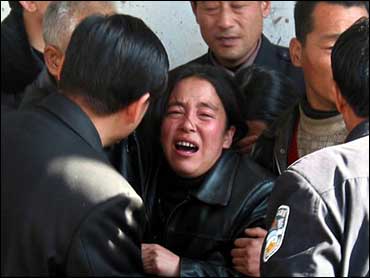 The death toll in a coal mine explosion in central China has risen to 63, with 103 miners still missing, the government said Tuesday, as an underground fire and toxic fumes released by the blast hampered rescue work.

Hopes are fading for the missing miners. If none survives, Sunday's explosion would be one of the deadliest disasters in a decade to hit China's accident-prone mining industry.

"This greatly hobbles the rescue work," said Song Zhigang, a local mine official quoted by Xinhua.

Rescue workers have recovered 63 bodies from the mine in Shaanxi province, Xinhua said, citing Huo Shichang, an official of the provincial coal industry administration.

Emergency workers descended into the mine Monday to repair ventilation systems needed to pump out toxic carbon monoxide fumes.

But gas levels in some areas are still too high for rescue workers to enter, Xinhua said.

State television on Tuesday showed stacks of blue oxygen tanks waiting outside the mine and officials studying blueprints as they organized rescue efforts.

The blast occurred some five miles from the mouth of the vast mine.

"My youngest child Pang Yuming entered the tunnel on Saturday night and he is still trapped inside," one woman, 66-year-old Nie Ruan'e, was quoted by Xinhua as saying.

"As a tunneling worker, he must stay in the working area near to the explosion site," she said. "I really don't know if he can get out of the tunnel alive."

The Chenjiashan mine employs 3,400 people and produced 2.3 million tons of coal last year, according to Xinhua.

Another gas explosion there in 2001 killed 38 people, the agency said.

The accident Sunday came just weeks after another coal mine explosion killed 148 people elsewhere in central China - the highest death toll in a mining accident since 2000.

China's coal mines are the world's deadliest, with 4,153 people reported killed in the first nine months of this year in fires, floods and other disasters. The government says Chinese mines accounted for 80 percent of all coal mining-related deaths worldwide last year.

Authorities have repeatedly vowed to do more to stop the high death rate by boosting safety measures and punishing negligent mine owners. But accidents are still reported almost daily. Officials say severe nationwide power shortages might be increasing pressure for mines to raise coal production, boosting the risk of accidents.

China, the world's biggest coal producer, churned out 1.6 billion tons of coal in the first 10 months of this year - up 19 percent from the same period last year.

Sunday, 16 officials in the northern province of Hebei were charged with helping to cover up a coal mine explosion June 3 that killed 14 miners and injured 23 others.

According to the Chinese news agency Xinhua, the mine owner is accused of collaborating with some local officials to give a false death toll of one to government investigators.

The report furthermore charges that officials - worried the mine might be closed if the true death toll were revealed - failed to search for more trapped miners and secretly cremated five bodies.