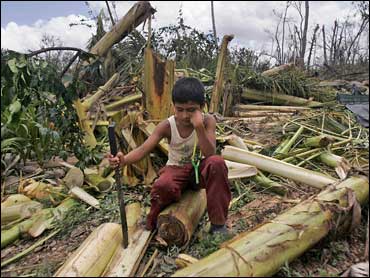 A sprawling Hurricane Dean slammed into Mexico for the second time in as many days and quickly stretched across to the Pacific Ocean Wednesday, drenching the central mountains with rain that swelled rivers before weakening into a tropical depression.

There was no escaping the wide storm's hurricane-force winds, which lashed at a 60-mile stretch of the coast in Veracruz state.

At 10 p.m. local time, Dean was about 95 miles northwest of Mexico City and was heading westward about 21 mph. The Hurricane Center downgraded Dean to a tropical depression and predicted it would dissipate on Thursday over the mountains of central Mexico.

During the day Wednesday, Dean's hurricane strength sent thousands scrambling and had others hoping for the best as they rode out the storm.

"You can practically feel the winds, they're so strong," said Maria del Pilar Garcia, as Dean made landfall 40 miles north of the hotel she manages in Tuxpan. "I hope this passes quickly and the rivers don't overflow."

Sounds of crashing metal prompted farmer Moises Aguilar to take a dangerous risk in Monte Gordo, 20 miles down the coast from Tecolutla. At the height of the storm, he dashed outside his house, about 300 yards from the sea, and struggled against the wind as his neighbor's roof ripped apart.

"We've closed the curtains because we don't want to see what is going on out there," Aguilar said, his voice nearly drowned out by another crash. "I think that's more metal roofing from my garage."

Mexico had suspended offshore oil production and shut down its only nuclear power plant as tens of thousands headed for higher ground.

More than 14,000 workers were evacuated from off oil facilities in advance of the storm.

The state oil company said there is no known damage to any of its production facilities on shore or in the Gulf of Mexico.

Dean struck land Wednesday as a Category 2 storm after regaining some of the force it unleashed on the Yucatan. Its first strike on the peninsula came Tuesday as a Category 5 tempest with 165 mph winds was the third most intense Atlantic hurricane ever to make landfall.

Officials say there are no reports of deaths in Mexico directly caused by Dean, which killed 20 people in its earlier sweep through the Caribbean. The toll rose Wednesday when Haitian officials said seven more storm deaths had been reported in remote areas.

Dean's sustained winds dropped to 85 mph, Category 1, shortly after making landfall late Wednesday, and it was downgraded to a tropical storm by afternoon with winds of near 70 mph.

But the biggest worry was rain. Up to 20 inches of rainfall were expected to swell rivers and soak mountains in a region prone to mudslides and flash floods.

"The water is rising. It's entering the houses now. The children are very frightened," said Maria Luisa Cervantes, who fled her low-lying home with her five children to a shelter in Poza Rica after a flying sheet of metal snapped power cables on to her roof.

The mountain ranges that parallel Mexico's coast are dotted with villages connected by precarious roads and susceptible to disaster. A rainstorm in 1999 caused floods that killed at least 350 people, destroyed tens of thousands of houses and damaged the pre-Hispanic ruins at Tajin.

"We don't want the same thing to happen again and we said, 'Let's get out of here,'" Jesus Vargas, a worker at a tire repair shop, said at a shelter in Poza Rica, a city 30 miles inland from Tecolutla. Poza Rica became the area's command center, with shelters for thousands.

Although Dean swept over the Yucatan as a rare Category 5 hurricane, which is capable of causing catastrophic damage, the storm's top winds were relatively narrow and appeared to hit just one town: the cruise ship port of Majahual.

The few people who had not evacuated Majahual narrowly escaped with their lives. Dean demolished hundreds of houses, crumpled steel girders, splintered wooden structures and washed away parts of concrete dock that transformed what once was a sleepy fishing village into a top cruise ship destination.

The storm surge covered almost the entire town in waist-deep sea water, said fishermen Jorge Gonzalez, who struggled to keep his dog Camilo above water after taking refuge in a flooded store. "There came a moment when I thought this was the end," he said.

Greatly weakened from its trip across the peninsula, Dean moved across the southern Gulf of Mexico, home to 100 oil platforms, three major oil-exporting ports and the Cantarell oil field, Mexico's most productive. All offshore production was halted ahead of the storm, reducing daily production by 2.7 million barrels of oil and 2.6 billion cubic feet of natural gas.

The storm surge flooded 70 percent of Ciudad del Carmen, a city of 120,000 where Mexico's state oil company has major installations. The standing water in the low-lying town was three feet deep in many houses, Campeche Gov. Jorge Carlos Hurtado told the Televisa network.

But no deaths were reported, and Pemex said its offshore platforms and loading facilities would emerge without major damage.

Mexico also stopped production and evacuated employees from its only nuclear power plant, Laguna Verde, on the Veracruz coast.

The last tourists left Tuesday from the beaches of the Emerald Coast, a getaway area where the storm brought battering waves and an expected storm surge of up to eight feet above normal.

"I wanted to stay, but my wife said no," said Zbigniew Szadkowski, 50, a physics professor from Lodz, Poland.