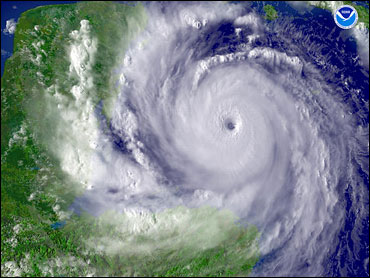 The eye of Hurricane Dean has struck Mexico's Caribbean coast, with winds of as much as 160 miles per hour also being felt in Belize. Oil rigs and tourist spots were evacuated as local authorities braced for what became a Category 5 storm as it headed for the Yucatan peninsula.

The U.S. National Hurricane Center said the eye of the storm came ashore in Mexico Tuesday, near Chetumal, at about 4:30 a.m. Eastern time.

Dean Monday strengthened into a Category 5 storm capable of catastrophic damage as its first rain and winds began hitting the coasts of Mexico and Belize. Thousands of tourists fled the beaches of the Mayan Riviera as the fast-moving storm roared toward the ancient ruins and modern oil installations of the Yucatan Peninsula.

Mexico's state oil company, Petroleos de Mexico, said it was evacuating all of its more than 14,000 offshore workers in the southern Gulf of Mexico, which includes the giant Cantarell oil field. Dozens of historically significant Mayan sites also were emptied, and any metal signs or objects that could go airborne in hurricane-force winds were removed.

Dean — which has killed at least 12 people across the Caribbean — quickly picked up strength after brushing Jamaica and the Cayman Islands.

Category 5 storms are monstrous, and rare — only three have hit the U.S. since record-keeping began.

Cancun's swanky hotels, many of them newly hurricane-proofed, seemed likely to be spared a direct hit.

An estimated 20,000 tourists are still in the area, reports CBS News correspondent Bianca Solorzano. Hundreds packed Cancun's airport Monday – many desperate to get on extra flights that airlines added.

Oil rigs are made of steel, designed to withstand damaging winds. And ancient Mayan sites like the stunning seaside temples at Tulum, about 75 miles north of Chetumal, were built from solid limestone.

Dean appeared to be bearing down on the Yucatan's most vulnerable population — the Mayan people — many of whom have seen little of the riches from oil or tourism, and still live in traditional wooden slat huts in small settlements all over this low-lying area.

"Yes, we are afraid," said construction worker Pedro Kanche, a Mayan, as he nailed boards against the windows of a shop in Cancun late Sunday. "The truth is that a lot of people lost jobs" during Hurricane Wilma in 2005, "and tourism still hasn't recovered."

Tulum shopkeeper Israel Martinez, speaking as he too nailed up boards across store windows Monday, expressed the kind of cold logic that rules a coast marked by contrasts of poverty and wealth, Indian and outsider.

"The less the tourist centers are affected, the faster the recovery will be," said Martinez, 28, a non-Indian who has lived in Tulum for 15 years. "Nobody wishes ill upon their neighbors, but if some of these smaller towns are hit, they can be repaired faster," without affecting the area's lifeblood, tourism.

A hurricane warning is in effect from Cancun all the way south through Belize, as well as the Yucatan's western coast. All hospitals were closed in Belize City, the country's biggest, and authorities urged residents to leave, saying Dean is too strong for their shelters. Meteorologists said a storm surge of 12 to 18 feet was possible at the storm's center.

The U.S. State Department has dispatched 30 officials from its embassy in Mexico City and consulates elsewhere in the country to assist Americans who may become stranded there. American officials will be available in Cancun, Cozumel and in Playa del Carmen, CBS News reporter Charlie Wolfson reported.

The storm is expected to slash across the Yucatan and emerge in the Gulf of Campeche, where Petroleos de Mexico decided Monday to shut down production on the offshore rigs that extract most of the nation's oil.

Central Mexico may be next on the storm's path, and the outer bands of the hurricane are likely to bring rain, flooding and gusty winds to south Texas, already saturated after an unusually rainy summer.

In Mexico, the Quintana Roo state government said about two-thirds of the 60,000 tourists in the Cancun area had left. Some camped overnight at the city's airport to ensure a flight out. Many others were turned away.

Eric Morovich of Orange County, California, waited outside Cancun's airport after trying unsuccessfully to book a ferry, rent a boat and charter an airplane.

"I'm just hoping that we get out in time," he said. "We've got two little kids back in the States."

Along Cancun's tourist strip, the skyline is still marked with cranes used to repair the damage of Wilma, which caused US$3 billion in losses.

Dean could be even stronger than Wilma, which stalled over Cancun and pummeled it for a day. The fast-moving Dean was passing farther south, and was likely to deliver a brief but powerful punch to the Maya heartland.

That area stretches from the stunning seaside ruins of Tulum south to the growing beach resort at Mahahual, where authorities evacuated hundreds of tourists on Monday. Between the two lies the 2.5 million-acre Sian Kaan nature reserve, with a 1,200-year-old network of Mayan canals.

Government anthropologists said they were preparing 13 archaeological sites for the storm, pruning trees and removing signs and vegetation that strong winds could turn into damaging projectiles.

"We're leaving. You don't play around with nature," fisherman Maclovio Manuel Kanul said, pulling equipment from his beachfront fishing shack near Cancun. "We still haven't been able to recover from Wilma, and now this is coming."

Dean, the first hurricane of the Atlantic season, raked Jamaica and the Cayman Islands on Sunday, but both escaped the full brunt of the storm.

In Jamaica, the storm uprooted trees, flooded roads and collapsed some buildings. Downed utility poles left thousands without electricity or telephone service. Police said two men were killed: one when his house collapsed and another struck by flying debris.

Haitian officials on Monday reported two more deaths from the storm, raising the storm's death toll in the Caribbean to at least 12.

The worst storm to hit Latin America in modern times was 1998's Hurricane Mitch, which killed nearly 11,000 people and left more than 8,000 missing, most in Honduras and Nicaragua.