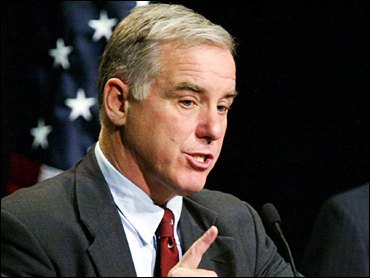 Democratic presidential hopeful Howard Dean, who has criticized the Bush administration for refusing to release the deliberations of its energy policy task force, as governor of Vermont convened a similar panel that met in secret and angered state lawmakers.

Dean's group held one public hearing and after the fact volunteered the names of industry executives and liberal advocates it consulted in private, but Dean refused to open the task force's private deliberations.

In 1999, he offered the same argument the administration uses today for keeping deliberations of a policy task force secret.

"The governor needs to receive advice from time to time in closed session. As every person in government knows, sometimes you get more open discussion when it's not public," Dean was quoted as saying.

His own dispute over the secrecy of the task force that devised a policy for restructuring Vermont's nearly bankrupt electric utilities has escaped national attention, even as he has attacked a similar arrangement used by President Bush.

In an interview with The Associated Press, Dean defended his recent criticism of Vice President Dick Cheney's task force and his demand that the administration release its private energy deliberations.

Dean said his group developed better policy in a bipartisan manner, seeking advice not just from energy executives but environmentalists and advocates for the poor. He said his task force was more open because it held a public hearing and divulged afterward the names of people it consulted even though deliberations were held in secret.

The Vermont task force "is not exactly the Cheney thing," Dean said. "We had a much more open process than Cheney's process. We named the people we sought advice from in our final report."

Dean said he still believes it was necessary to keep his task force's deliberations secret, especially because the group was reviewing proprietary financial data from Vermont utilities. "Some advice does have to be given in private, but I don't mind letting people know who gave that advice," he said.

An expert in political rhetoric said it was risky for Dean to attack Bush and Cheney on an issue where he was vulnerable.

"In general, what is good for the vice president should be good for the governor. A candidate who attacks on grounds he is vulnerable is foolish," said Kathleen Hall Jamieson, a University of Pennsylvania professor who helps run a Web site that compares presidential candidates' rhetoric with the facts.

Dean's campaign said it was "laughable" to equate the two panels.

"Governor Dean confronted and averted an energy crisis that would have had disastrous consequences for the citizens of Vermont by bringing together a bipartisan and ideologically diverse working group that solved the problem," spokesman Jay Carson said Sunday.

"Dick Cheney put together a group of his corporate cronies and partisan political contributors, and they gave themselves billions and disguised it as a national energy policy."

In September, Dean argued that the task force Cheney assembled in 2001 and the Bush energy policy that were unduly influenced by Bush family friend and Enron energy chief Kenneth Lay. He demanded that records of its deliberations be made public.

"The administration should also level with the American people about just how much influence Ken Lay and his industry buddies had over the development of the president's energy policy by releasing notes on the deliberations of Vice President Cheney's energy task force," Dean said on Sept. 15.

In 1998, Dean's Vermont task force met in secret to write a plan for revamping state electricity markets that would slow rising consumer costs and relieve utilities of a money-losing deal with a Canadian power company, Hydro Quebec.

The task force's work resulted in the Dean administration and state utility regulators advocating that Vermont have the first utility in the country to meet energy efficiency standards.

It also freed the state's utilities from burdensome costs from a long-term deal with Hydro Quebec that had left them near bankruptcy by passing as much as 90 percent of those costs to consumers. Utility shareholders also suffered some losses.

The parallels between the Cheney and Dean task forces are many.

Both declined to open their deliberations, even under pressure from legislators. Both received input from the energy industry in private meetings, and released the names of task force members publicly.

Dean's group volunteered the names of those it consulted with in its final report. While Cheney has refused to formally give a list to Congress to preserve the White House's right to private advice, known as executive privilege, his aides have divulged to reporters the names of many of those from whom the task force sought advice.

The Bush-Cheney campaign and Republican Party received millions in donations from energy interests in the election before its task force was created.

Dean's Vermont re-election campaign received only small contributions from energy executives, but a political action committee created as he prepared to run for president collected $19,000, or nearly a fifth of its first $110,000, from donors tied to Vermont's electric utilities.

One co-chairman of Dean's task force, William Gilbert, was a Republican lawyer who had done work for state utilities. At the time, Gilbert also served on the board of Vermont Gas Systems, a subsidiary of Hydro Quebec.

Many state legislators, including Dean's fellow Democrats, were angered that the task force met secretly.

"It taints the whole report," Democratic state Rep. Al Stevens told the AP in 1999. "I'd have more faith in that report if the discussions had been open."

Elizabeth Bankowski, a Democrat who co-chaired the task force with Gilbert, told the legislature that the secrecy requirement "was decided in advance by the governor's office and the governor's lawyer."