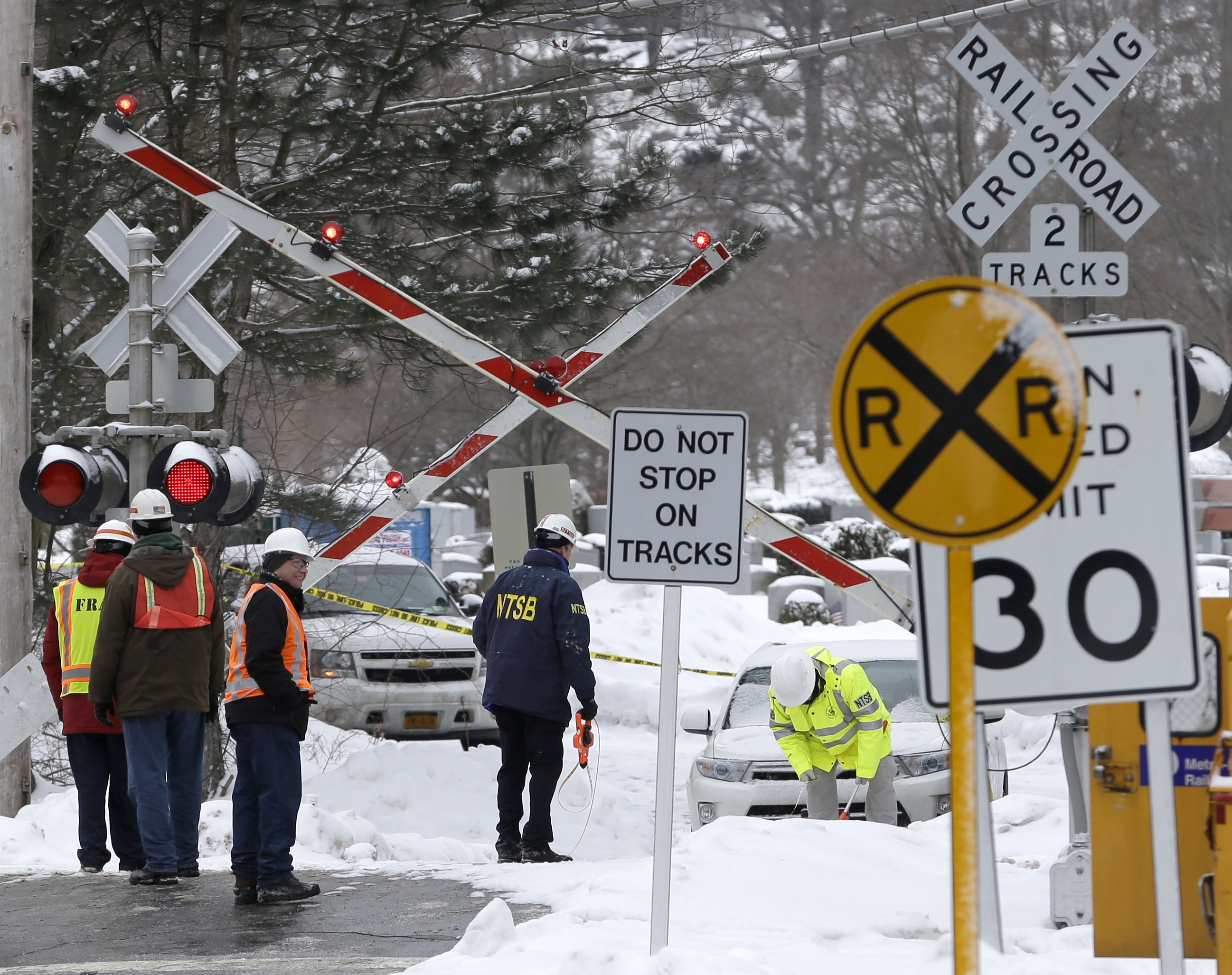 VALHALLA, N.Y. -- An SUV was in the danger zone inside railroad crossing gates for about half a minute before a commuter train crashed into it, killing the driver and five train passengers, investigators' preliminary findings indicate.

While investigators have yet to answer many questions about Tuesday's fiery crash, their early findings shed some light on the timeline.

"What we have here is: We have a mosaic," Sumwalt said. "We're going to take different pieces of information, pull it all together and then paint a picture of what's happened."

A funeral service was scheduled for Friday morning for the SUV's driver, Ellen Brody, a 49-year-old mother of three.

Her family issued a statement Thursday saying they are devastated over losing Brody. "She was a warm, vivacious and dynamic presence in our lives, and the most loving and nurturing mother, wife, daughter and sister," the statement said.

The SUV driver got ahead of the crossing gate in inching traffic, then got out of her car to examine it after the gate came down and hit the back of it, a witness has said. But then she got back in, seeming unhurried, and advanced onto the track, the witness told news outlets and investigators.

Sumwalt did not name the witness, but CBS New York notes that a motorist named Rick Hope told the Journal News he backed up and motioned for Brody to do the same.

"She wasn't in a hurry at all, but she had to have known that a train was coming," Hope told the newspaper.

The train's engineer also told investigators that he saw the car moving onto the tracks.

Investigators were trying to obtain information from a computer module that was in the SUV that Brody was driving, reports CBS New York.

Investigators haven't found any problems with the warning signals or the nearby traffic lights, which are synched to let drivers clear the crossing when a train is coming, Sumwalt said. The crossing also had painted warnings on its pavement, and a sign 65 feet from the rail warns drivers not to stop on the tracks, he noted.

The agency hasn't mapped out how far before the crossing the engineer hit the emergency brakes on the train, which takes about 950 feet and 30 seconds to stop, Sumwalt said.

After the impact, flames enveloped the SUV and part of the train, and the electrified third rail pierced them. Hundreds of passengers scrambled through spreading smoke and fear, some helping each other to escape despite their own injuries.

Trains hit cars on the tracks many times a year, but such crashes rarely kill train riders. Investigators have emphasized that they want to figure out why this one did, becoming the deadliest accident in the 32-year history of one of the nation's busiest commuter railroads.

Investigators are looking for any elements that may have intensified the fire, which they believe was ignited by the SUV's gas tank. The NTSB has been examining such factors as the adequacy of emergency exits, the crashworthiness of the train cars and the unusual design of the Metro-North line's third rail.

The agency also is looking into how familiar the SUV driver was with her car and her route, whether she was using a cellphone and whether the backed-up traffic played a role.

Passengers returned, some with hesitation, as service resumed Thursday on the line where the crash happened, after workers rebuilt about 500 feet of the third rail.

Julie Garla was feeling "very lucky and still a little scared" as she rode the Harlem Line. But since the passengers who died were in the first car, she's no longer going to sit there, she said.

But Bill Peterson is.

"I believe the Lord's going to protect me," he said, and "the chances of it happening again are probably tiny."