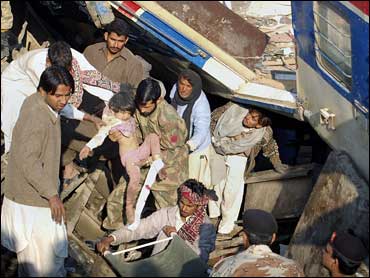 An express train crowded with holiday travelers derailed in southern Pakistan on Wednesday, killing at least 58 people and injuring another 150, officials said.

The train was traveling from Karachi toward Lahore when about 12 of its 16 carriages came off the rails near Mehrabpur, about 250 miles north of Karachi.

It was unclear what caused the accident, which left hundreds of terrified passengers trying to claw their way out of the mangled wreckage in total darkness.

Army engineers used two cranes and cutting equipment to free the last survivors, including a girl aged about 3 with a bloodied left foot, from one of the badly damaged carriages, many of which were thrown down an embankment into a waterlogged field.

Dozens of soldiers and police helped tend the injured and carry them away to waiting ambulances, as hundreds of people from the surrounding villages looked on.

The train, which derailed at about 2 a.m. (2100 GMT Tuesday), was loaded with an estimated 900 passengers, many of them heading home for the Islamic holiday of Eid ul-Adha.

Shahid Khan, a 25-year-old who had been traveling to Lahore with six of his relatives, said he used the light from his mobile phone to find his way out.

"The train was going at full speed. Then there was a sudden jerk and we felt the train sinking into the earth. There was chaos everywhere," said Khan, sitting next to bundles of luggage he had salvaged from a carriage lying on its side in the field.

Another passenger, Mohammed Yusuf, sat on a pink blanket next to a pile of discarded shoes and clothes, wailing in grief at the death of his younger brother.

He said his wife, two children and another brother were injured and taken to a hospital, condition unknown.

Yusuf, 26, said his brother survived the impact and was crying out in pain, but that he had been unable to free his trapped leg from the wreckage.

"It's unbearable. Don't say that he is dead," he pleaded, as other relatives tried to console him.

Mohammed Khalid, a railway official who was traveling in one of the rear wagons which stayed on the rails, said he suspected a problem with the track caused the accident.

"My guess is that there was some piece of rail missing and the engine jumped the missing track and the following wagon got stuck," he said.

After the crash, a section of one of the rails had been torn loose. The engine came to a halt about a mile further up the line.

Brig. Nazhar Jamil, the army officer in charge of the relief operation, said an initial inspection of the track found no sign of sabotage. He said excessive speed coupled with poor maintenance might have been to blame.

A speeding train struck a crowded bus at a railway crossing near Lahore in October, killing 12 people and injuring about 50 others. About 130 people died in July 2005 when three trains collided in southern Pakistan.