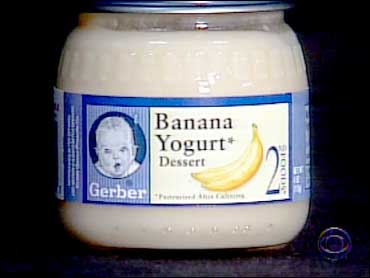 Poison found in two jars of baby food purchased at the same store was not in a deadly form and the two infants who ate small of amounts of the banana yogurt dessert did not even fall ill, officials said.

too small to harm anyone
.

The contamination of the Gerber brand food was disclosed Wednesday by police, who are searching for a man they believe may have witnessed the tampering. Charles Dewey Cage, 47, of Irvine, was "in the area at a relevant time," said Orange County District Attorney Tony Rackauckas.

A man identifying himself as Cage called the Orange County Register on Wednesday night to say he needed "a good lawyer" and to deny any involvement.

"I've got two strikes on me," said the caller. "Do you think I'd do something like that? I did not do it."

When a reporter quizzed the man to confirm his identity he provided Cage's birth date.

No one has been arrested, and authorities said no more contamination was found at the Irvine supermarket.

"There's no reason to believe there is any more out there," said Dan Henson, special agent in charge of the FDA's Los Angeles field office.

The jars were tainted with ground-up castor beans containing tiny amounts of the poison ricin, said Food and Drug Administration officials who tested the baby food. It was a less toxic, natural component of the castor beans, which can be obtained from ornamental plants.

"It's unlikely there would be serious injury with the level of castor bean found in those two jars we tested," Dr. David Acheson, chief medical officer with the FDA's Center for Food, Safety and Applied Nutrition, said Wednesday.

On June 16, a man told Irvine police that as he prepared to feed his son, he found a note inside a jar of baby food warning that it had been contaminated. A similar case was reported by an Irvine couple on May 31.

Irvine Police Chief David Maggard told the Register the notes said that "the person who ate it would die in a short time."

Investigators said the message implied the jars were poisoned by an Irvine police officer. That officer, who was not identified, is not a suspect. The case was turned over to the district attorney's office.

Acheson said the FDA received the samples several weeks ago and ran extensive tests to determine the contents disclosed Wednesday. A third jar taken from one of the homes had been washed by the parents and didn't have enough food inside to be tested.

The Gerber Products Co., based in Parsippany, New Jersy, is working with investigators. Authorities told the company the contamination occurred after the food was manufactured, said Gerber spokeswoman Terry Boylan.

As an added precaution, Gerber has removed its banana yogurt dessert from all stores in Southern California.

Gerber baby food jars are vacuum sealed and should pop when opened, but Rackauckas advised people to buy jars with a plastic seal and suggested pouring the food into a plate to check it before serving.

Ricin, in its purified form, can be fatal if swallowed, inhaled or injected. A dose about the size of the head of a pin could be enough to kill an adult, according to the federal Centers for Disease Control and Prevention.

Since Sept. 11, law enforcement has investigated several threats involving ricin. Just this year, parts of the U.S. capitol were evacuated when a small amount of ricin was found in Sen. Bill Frist's mailroom, reports Hughes.

The FBI still is trying to determine how ricin turned up in a U.S. Senate mailroom in February. The discovery led to the shutdown of three Senate office buildings for several days.

Also still unsolved are two letters found last year in postal facilities that contained vials of ricin and were signed by a mysterious "Fallen Angel," who objected to new government rules for longhaul truckers. One of those letters was addressed to the White House and was intercepted by the Secret Service.