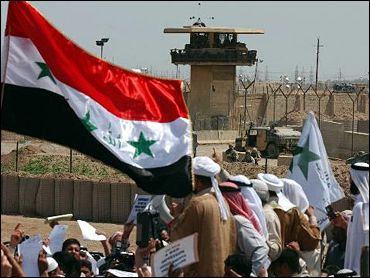 The heaviest fighting came in the city of Karbala, south of the capital, where coalition forces raided a hotel, the local former Baath Party headquarters and the regional governor's office, where fighters loyal to Muqtada al-Sadr had been stockpiling weapons, Brig. Gen. Mark Kimmitt said.

In the raid overnight on the governor's office, troops came under fire and in the battle that ensued, 10 al-Sadr followers were killed, Kimmitt told reporters in Baghdad. The Polish command in Iraq said a soldier was killed in the clashes, without specifying his nationality. Polish, Bulgarian, U.S. and other peacekeepers are active in the area.

The U.S. soldier from the 1st Armored Division died when a dump truck tried to ram the checkpoint, where the soldier was positioned, the military said.

Outside the cities of Kufa and Najaf, U.S. forces attacked a van where Iraqis were seen unloading weapons. The vehicle was destroyed and five Iraqis were killed, Kimmitt said.

In Najaf, militiamen of Sadr's Al-Mahdi Army ambushed three U.S. Humvees on Wednesday. Soldiers in the vehicles opened fire with machine guns on the attackers, who withdrew. There were no immediate reports of casualties.

Coalition troops also raided and occupied al-Sadr's office in the city of Diwaniyah in an operation to "reduce militia influence in the city," Kimmitt said. The troops were fired on from a vehicle, which was destroyed.