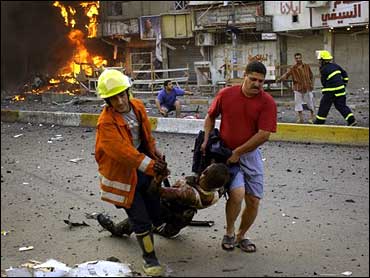 Nearly 40 people died in a rash of car bombings in Iraq's capital over a 12-hour span, including two coordinated blasts early Thursday that killed 15 and wounded 28 in a central Baghdad shopping district, police said.

Thursday's carnage in the capital's Karradah area came on the heels of bloodshed late Wednesday that included four car bombs exploding within minutes of one another. At least 23 people were killed in western Baghdad's Shula neighborhood and a nearby suburb. Nineteen were killed in Shula alone.

The attacks served as a chilling reminder of how potent militants remain in the capital despite around-the-clock American and Iraqi troop patrols.

Most residents of Karradah and Shula are from Iraq's Shiite majority, while the insurgents are almost exclusively Sunni Arabs, a minority that dominated Iraq until Saddam Hussein's ouster two years ago.

The explosions both days were carried out at times when large crowds were on the capital's streets. Wednesday night's bombs came hours before an 11 p.m. curfew, when many residents are out at eateries or chatting on the streets before locking themselves inside their homes.

A few trees were toppled, scattering leaves on the sidewalk.

In all, at least 32 people were killed Wednesday across Iraq, including a prominent Sunni law professor assassinated by gunmen. Jassim al-Issawi was a former judge who put his name forward at one point to join the committee drafting Iraq's constitution. The assassination appeared aimed at intimidating Sunni Arabs willing to join Iraq's efforts to create a stable political system.

It sent a powerful message to the Sunni Arab community to either boycott involvement in the fledgling government or risk death.

In Brussels, Belgium, an international conference adopted a declaration of support for the struggling nation, backing the Iraqi government's "efforts to achieve a democratic, pluralist, federal and unified Iraq."

"The Summit, hosted by European and U.S. leaders, hopes to spur political and financial aid to Iraq and make good on assistance promised for Iraq's reconstruction," said CBS News Foreign Affairs Analyst Pamela Falk. "For a mid-July donors' conference to succeed, the U.N., the U.S. and the Iraqis must get the point across in Brussels that progress is being made."

But al-Issawi's killing and the Baghdad bombings provided fresh evidence of the insurgents' ability to strike with impunity in the heavily protected capital, where U.S. and Iraqi forces hunt insurgents around the clock.

Deputy Prime Minister Ahmad Chalabi, a senior Shiite politician and a former Washington insider, condemned the assassination and renewed his government's commitment to include Sunni Arabs in drafting the constitution.

Leaders of the Sunni Arab minority also condemned al-Issawi's assassination, linking it to what they said was a plan to eliminate key minority figures ahead of the crucial task of writing the country's basic law.

There was no immediate claim of responsibility for al-Issawi's assassination, but Abu-Musab al-Zarqawi's al Qaeda in Iraq has threatened to kill Sunni Arabs cooperating with the government or the United States.

Sunni Arabs, who dominated Iraq for decades, lost power when Saddam, their last patron and a Sunni, was ousted. Their boycott of historic elections in January further sidelined them.

But Sunni Arab participation in the political process is essential for Iraq's passage to democracy.

Parliament has until Aug. 15 to draft the new constitution, which will be put to a referendum two months later. If ratified, it will be the basis for a general election in December, giving Iraq its first, full-term elected government in decades.