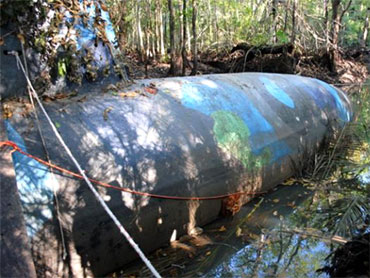 The U.S. Drug Enforcement Administration helped authorities in Ecuador seize what they say was a submarine built to transport tons of cocaine, the agency announced Saturday.

Ecuadorian police arrested one person when they seized the sub, which the DEA said is located near a tributary close to the border separating Ecuador and Colombia. The agency said the sub was seized before its maiden voyage. Investigators are looking for the people who built the sub.

The agency said the sub was built in a remote jungle to prevent detection from authorities. The seizure represents the first of a submarine secretly built for drug shipments.

"The advent of the narco-submarine presents new detection challenges for maritime interdiction forces," Jay Bergman, DEA Andean regional director, said in a statement. "The submarine's nautical range, payload capacity and quantum leap in stealth have raised the stakes for the counter-drug forces and the national security community alike."

The twin-screw, electric sub measures about 100 feet long, the agency said. The air-conditioned interior measures about 9 feet high and included a periscope.