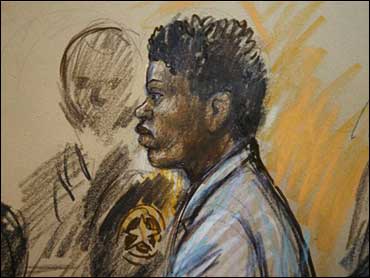 A mother found in her home with the decomposing bodies of her four daughters was charged Thursday with murder after reportedly telling investigators that the children were possessed by demons and died in their sleep.

Banita Jacks, 33, was charged with four counts of first-degree murder and appeared in District of Columbia Superior Court. She told police that the deaths occurred before a utility turned off her electricity, which prosecutors said was in September 2007, according to charging documents.

The bodies of the girls - ages 5 to 17 - were found Wednesday when deputy U.S. marshals served an eviction notice at the apartment in southeast Washington.

Jacks told investigators that the children were possessed by demons and began dying in their sleep, one by one, within a seven-day period, documents say. She also said she had not fed her children for a substantial time before their deaths.

Medical examiner Dr. Marie-Lydie Pierre-Louis said the bodies were in the apartment more than 15 days, "based on the insects that were found there."

Jacks could receive a maximum sentence of life in prison if convicted.

Jacks appeared in court in a white jump suit and sandals. She did not speak during the hearing. Superior Court Magistrate Judge Karen Howze ordered her held without bond. Her attorneys had argued that she should be released to the custody of an adult relative pending trial.

"I don't know how many bodies we need before we determine that Ms. Jacks is a danger to the community," said Deborah Sines, assistant U.S. attorney.

When the deputies went to the home Wednesday, Jacks tried to block them from the second floor, according to the charging documents.

Once inside, marshals found religious writings on the walls, authorities said, according to the Washington Post.

One of the deputies walked around her and spotted the bodies of the three younger children on the floor of an unfurnished bedroom. He then opened the door to another bedroom and found Brittany's body, also on the floor of a bare room.

The three children were dressed in white T-shirts, the documents said.

Brittany's body was naked but was partially covered by a white T-shirt. An object that appeared to be a steak knife lay nearby, and there was a dried maroon liquid around the body, according to the documents.

Jacks graduated from Aaron's Academy of Beauty in Waldorf in August 2005 with a license to practice cosmetology, said Stacy Lynch, the school's director. She described Jacks as a friendly woman, a good student and a good mother.

"She loved her children," said Lynch. "When you saw Banita outside of school, you saw the girls ... they were always together."

Court records in Charles County, Md., show that Jacks filed paternity suits against three men, two of which were successful. In one case, Norman C. Penn Jr., whose most recent address is in Glen Burnie, is named the father of Brittany. In another case, Kevin J. Stoddard, whose most recent address is listed in Prince George's County, acknowledged he is the father of Tatianna.

The county court records indicated that both men failed to pay required child support. Penn was convicted of criminal contempt and received a suspended jail sentence. Records also show that in 2004, lenders foreclosed on a Waldorf townhome that Jacks had purchased three years earlier.

City officials were scrambling to understand how four children could have been dead for at least two weeks without anyone knowing.

Mayor Adrian Fenty said Thursday that officials were working to determine what other contacts city agencies had with the family.

"We are going to investigate every single contact that this family has had with the government, with people who are paid to look out for the welfare of children, and we will come back with a full report," Fenty said.

Several relatives stopped by the house to visit or to deliver child support checks, but Jacks didn't answer the door. Jacks sometimes telephoned after the visits and reported that everything was under control, they said, according to the Washington Post.
"Sometimes she wouldn't answer the door," recalled Tywana Richardson, godmother to the two youngest girls, who said she tried to stay in touch with the family after Fogle's death. "No one would answer the door. That happened a lot. . . . When I kept going and she wasn't there, I figured she had upped and moved."

When they stopped showing up, Richardson said the school immediately tried to contact the mother by mail and telephone. Officials finally went to the woman's home and the woman told a school official that she wanted to withdraw the children and home-school them. They were officially withdrawn in mid-March 2007.

A child at Jacks' Washington address also had attended Stuart-Hobson Elementary School but withdrew in 2006 as a fifth-grader, public school officials said.

The D.C. Child and Family Services agency tried last year to investigate a complaint about the family. But investigators could not make face-to-face contact with family members and believed they had moved to Maryland, agency spokeswoman Mindy Good said.

Norris West, a spokesman for the Maryland Department of Human Resources, said D.C. officials in June asked social services officials in Charles County, Md., to open a case for the family. However, county officials were not able to locate the family, and it is unclear whether they had actually moved to Charles County, West said.

Outside the courthouse, a woman who said she spent the day with Jacks in a cellblock area, told reporters Jacks admitted to killing her children.

"She kept talking about her kids had demons in them," said Tamara Crump, who was locked up on a drug charge but let go after authorities declined to prosecute her. She said Jacks "smelled like death," an odor so strong that Crump and other prisoners asked for masks, according to the Washington Post.

"The woman is crazy," Crump said.

Fenty said Thursday that besides at least one contact with child welfare officials, the family had at least one brush with D.C. police.

According to court records, Jacks was charged in January 2007 with driving an unregistered vehicle. In February, she paid a $175 fine and the case was dismissed.
© MVIII, CBS Interactive Inc. All Rights Reserved. This material may not be published, broadcast, rewritten, or redistributed. The Associated Press contributed to this report