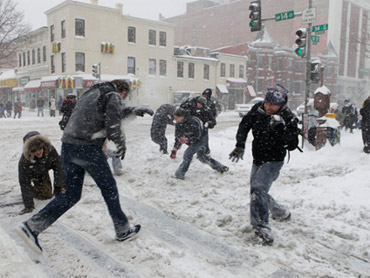 Washington, D.C., police are investigating after Internet videos showed a detective waving his gun during a mass snowball fight on a city street.

Police said Monday they were looking into reports that the plainclothes officer pulled a gun after he and his personal car were hit by snowballs. Police say witness accounts and videos from the scene appeared to support the claims.

Hundreds of people were gathered for the snowball fight during Saturday's record snowstorm.

A video posted on YouTube showed the officer waving and pointing a gun as he walks toward the snowballers. Another video shows what appears to be the same man telling people he is a detective and that he pulled his gun because he was hit by snowballs.