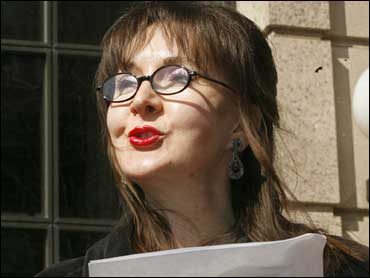 The so-called "D.C. Madam" vowed she would never go to federal prison for running a high-end Washington prostitution ring. Not even for a day.

Deborah Jeane Palfrey made good on that promise Thursday when she went to a shed outside her mother's mobile home and hanged herself from a rafter with nylon rope.

The 52-year-old Palfrey was convicted two weeks ago of running a prostitution service that catered to members of Washington's political elite, including Sen. David Vitter, a Louisiana Republican. She was free while she awaited sentencing on July 24.

Dan Moldea, a Washington writer who befriended Palfrey while considering writing a book about her, recalled a conversation with Palfrey over dinner last year when the subject of prison came up.

"She said, 'I am not going back to prison. I will commit suicide first,'" Moldea said.

Palfrey's 76-year-old mother, Blanche Palfrey, found the body in the tiny shed outside the pink and white mobile home in the community of mostly retirees in this Gulf Coast town 20 miles northwest of Tampa.

"She opened the shed to go in and she found her daughter hanging there," said neighbor Irwin Matthews, 73, who saw Blanche Palfrey hysterically calling for help after the discovery.

Police said Deborah Palfrey left at least two suicide notes and other writings to her family in a notebook, but they did not disclose their contents.

Blanche Palfrey told investigators she had no indication that her daughter, who had been staying at the house, was suicidal, police Capt. Jeffrey Young said. There was no immediate indication that drugs or alcohol were involved.

"This is tragic news and my heart goes out to her mother," said attorney Preston Burton, who represented Deborah Palfrey in her trial.

A federal jury convicted Palfrey on April 15 of money laundering, using the mail for illegal purposes and racketeering. Palfrey had denied her escort service engaged in prostitution, saying that if any of the women engaged in sex acts for money, they did so without her knowledge.

The trial concluded without revealing many new details about the service or its clients. Vitter was among possible witnesses but did not take the stand.

Channing Phillips, the spokesman for the U.S. attorney's office in the District of Columbia, said that under sentencing guidelines, Palfrey faced about five or six years in prison.

"I'm sure as heck not going to be going to federal prison for one day, let alone four to eight years, because I'm shy about bringing in the deputy secretary of whatever," Palfrey told ABC last year when she released phone records that revealed some of her clients. "Not for a second. I'll bring every last one of them in if necessary."

Vitter, a first-term senator who is married and has four children, has acknowledged being involved with Palfrey's escort service and has apologized for what he called a "very serious sin." But he avoided further comment.

Besides Vitter, the trial also concluded without the testimony of military strategist Harlan Ullman or Randall Tobias, a former senior State Department official. Both men had been named among possible witnesses.

One of the escort service employees was former University of Maryland, Baltimore County, professor Brandy Britton, who was arrested on prostitution charges in 2006. She committed suicide in January before she was scheduled to go to trial.

Palfrey said last year that she, too, was humiliated by her prostitution charges, but said: "I guess I'm made of something that Brandy Britton wasn't made of."