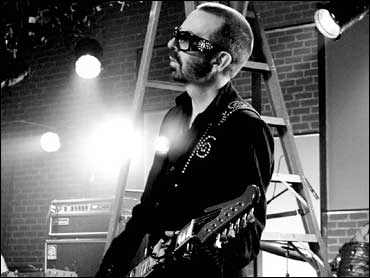 Sure, former "Eurythmics" singer/songwriter Dave Stewart has "traveled the world and the seven seas," but there is always new territory to be covered.

So it's been quite a musical journey for the talented Brit, and although he's been in the music biz for decades, he still has the right formula for creating hits.

"I have had the knack of knowing what is going to be a hit and I think it's just by keeping one side of your brain as a kind of like a fan and a general public," Stewart said. "I still buy new records and I am still crazy about lots of new bands. When I hear something that is incredibly familiar, but it hasn't been made before then you know, 'Oh that's going to be a hit.'"

The 55-year-old songwriter and guitarist doesn't stop there.

"I enjoyed working with every different kind of artist," Stewart said. "You are talking about people who are all genius in their own right. When you are working with people like that, it's almost like falling in love over and over again because you are exchanging ideas and concepts that you normally would only do in a personal, intimate relationship, but with genius writers."

Not bound to a single genre, Stewart has also teamed up with Celine Dion, Sinead O'Connor, No Doubt, Sarah McLachlan, Joss Stone and newcomer Katy Perry ("I Kissed A Girl").

"I just keep working. For instance, Kate Perry and I have written a song on her new album and her single is number one and the same time I am still writing new songs with Mick Jagger (since 1985). I don't try to remain current or fashionable. I just do what I want to do," Stewart said.

Now Stewart is dipping into his stellar body of work and taking the music to a different octave.

The album features Eurythmics' hit "Sweet Dreams" and "Here Comes The Rain Again," Tom Petty's "Don't Come Around Here No More," and No Doubt's "Underneath It All."

"I was thinking I would really like to play live again," Stewart said. "I thought that I'd love to play with a whole orchestra and a band and fuse them together - so it's not like an orchestra playing along politely it's a full-on rock fabulous orchestra."

"Now I want to make it a spectacle. So, now I am launching this whole 'Rock Fabulous' (clothing) line with Christian Audigier and he's designed all of the costumes for the orchestra," he explained.

"We eventually built up this sound. And when we got on the road, all of the scores are written. So, the orchestra can play along, but I can loop it so we can do instrumentals and the orchestra knows what's happening and we can get back to the verse. It's unusual."

Not only has Stewart had a hand in nurturing the careers of music greats, he has captured them through the camera lens.

In addition to showcasing his work in exhibits around the world, Stewart plans to release an upcoming 300-page hardcover coffee table book version of "The Dave Stewart Songbook."

"I have taken some incredible pictures of Bjork, who looks like she's in a weightless spaceship that will be in the exhibition," Stewart said.

He has also captured actress Demi Moore in India and "all made up as a man," he explained.

On the music front, he hopes that his 30-Piece Rock Fabulous Orchestra will encapsulate his past yet create a new beginning.

"I want the curtain to drop and have their breath taken away," he said. "So, when we launch into 'Sweet Dreams' with all of the cellos and everything, it's like going to see a real show."

And as always, whether he's brainstorming with rock music legends, behind the camera lens or at center stage, Stewart, with his keen sense for what makes a hit song, continues to keep an ear out for that catchy tune or guitar riff.

Editor's note: Stewart has cancelled several tour dates due to unforeseen circumstances. In lieu of the larger tour, he will be performing at venues in select cities in support of his new album "The Dave Stewart Songbook Vol. 1." The new dates and venues will be announced at a later date. Stewart regrets any inconvenience this may have caused his fans, according to an official press release.
View CBS News In
CBS News App Open