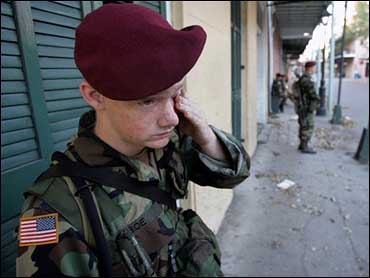 The rescue of holdouts, the cleanup and the recovery of bodies was continuing Thursday in the Gulf Coast region devastated by Hurricane Katrina.

Soldiers toting M-16s strengthened their grip on New Orleans as concerns grew about the risks posed by the toxic floodwaters and officials braced for what could be a staggering death toll by readying 25,000 body bags.

Thousands of evacuees were still finding it difficult to get assistance, reports CBS News Correspondent Cami McCormick. They stand in lines for hours in the hot sun for emergency food stamps. There's no sign yet of the debit cards promised by the Federal Emergency Management Agency.

Congress was considering an emergency aid package that would spend well over $1 billion a day during the next month on housing, clothing and other recovery needs for Hurricane Katrina victims. The House of Representatives Thursday passed the $51.8 billion spending bill requested by the Bush administration. The Senate vote was expected later Thursday.

A Mexican army convoy began crossing into the United States on Thursday to bring aid to victims of Hurricane Katrina. Carrying water treatment plants and mobile kitchens that can feed 7,000 people daily, the convoy bound for San Antonio is the first Mexican military unit to operate on U.S. soil since 1846.

As if higher gasoline prices weren't enough, the Energy Department warned that natural gas prices could increase as much as 71 percent in part of the country this fall, raising the prospect of higher home heating costs this winter.

After meeting with state and local officials, Cheney toured a particularly damaged part of Gulfport, and told reporters he was struck by the "very positive, can-do" attitude of Mississippians toward the help they are getting. In general, Mississippi officials have been much more complimentary of the federal hurricane response than those from Louisiana and, particularly, New Orleans.

At least 32 sick and elderly patients were trapped in the rising waters at a Meraux, La., nursing home whose owner refused an offer of help evacuating the patients, reports CBS News Correspondent Lee Cowan.

"They were offered help, but they turned it down," said St. Bernard Parish president Junior Rodriguez. "Somebody made a bad, bad decision."

Searchers were armed with proof of what many holdouts had long feared, the results of the first round of testing by the Environmental Protection Agency: The floodwaters are thick with sewage-related bacteria that are at least 10 times higher than acceptable safety limits. The muck contains E. coli, certain viruses and a type of cholera-like bacteria.

Adding to the sense of urgency, reports CBS News Correspondent John Roberts, there are gas fires all over New Orleans — oil and gasoline on top of the water.

In a Thursday morning, an overwhelming number of Americans say the government response was too slow. The blame is shared by all levels of government.

Officials readied for the potential of a horrendous death toll. Bob Johannessen, spokesman for the state Department of Health and Hospitals, said officials have 25,000 body bags on hand in Louisiana. Asked if authorities expected that many bodies, he said: "We don't know what to expect."

Mayor Ray Nagin had earlier said New Orleans' death toll could reach 10,000. Already, a temporary warehouse morgue in rural St. Gabriel that had been prepared to take 1,000 bodies was being readied to handle 5,000.

There are many challenges there, reports CBS News Correspondent Mark Strassmann: Identifying the dead, processing the bodies, notifying survivors. Katrina was such a killer that St. Gabriel's temporary morgue could be open indefinitely.

The official death toll in Mississippi climbed to 201 Wednesday, but more than 1,000 are feared dead there, too.

"Between the wind and the water, it just wiped out an entire city," insurance adjustor Tom Lupo told CBS News Correspondent Lee Frank. "You can't stop staring at it. Mother Nature is that powerful. It's unbelievable."

Some holdouts in New Orleans complained of the aggressive tactics in implementing the evacuation order.

"They came at gunpoint, told us 'come out of the house with a gun, we'll shoot you. Get in the boat now," resident Rick Matthews told Roberts. "You don't have no results but to get in now. And he made 'em leave and took him out."

Also Thursday, the United States asked NATO to take on a bigger role transporting European aid to areas hit by Hurricane Katrina. That may include use of ships from the elite NATO Response Force. The last time NATO forces helped out in the U.S. was at the 2002 Salt Lake City Winter Olympics, shortly after Sept. 11, when AWACS reconnaissance jets patrolled the skies.