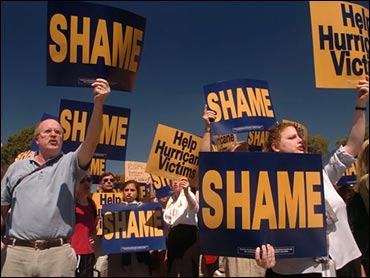 Acting with extraordinary speed, Congress approved an additional $51.8 billion for relief and recovery from Hurricane Katrina on Thursday. President Bush pledged to make it "easy and simple as possible" for uncounted, uprooted storm victims to collect food stamps and other government benefits.

"We're not asking for a handout, but we do need help," said Sen. Trent Lott — whose home state of Mississippi suffered grievously from the storm — as lawmakers cleared the bill for Bush's signature less than 24 hours after he requested it. The measure includes $2,000 debit cards for families to use on immediate needs.

The overwhelming, bipartisan support for the measure — it passed 411-10 in the House and 97-0 in the Senate — masked murmurs of concern about a rapidly rising price tag as well as a growing atmosphere of political jockeying in Congress less than two weeks after the hurricane battered the Gulf Coast.

Under fire for the government's slow response, Mr. Bush said "the people that have been hurt by this storm need to know that the government is going to be with you for the long haul."

Mr. Bush also designated Friday as a national day of prayer and remembrance for victims across the Gulf Coast.

CBS News Correspondent Gloria Borger reports that there is no rallying around the president as there was after 9/11 when America was united against the terrorists. This time, the enemy is incompetence.

"Things did not go perfectly," said Senate Majority Leader Bill Frist. "We all know that there was a systemwide failure."

Americans generally agree that the government responded poorly to the hurricane. According to a poll, 77 percent said the federal government's response was inadequate, while 58 percent disapproved of how Mr. Bush handled the crisis.

The poll also shows that two out of three Americans think the president himself responded too slowly. His leadership rating – usually his strong suit – is the lowest of his presidency, a full 35 points lower than it was after 9/11.

Mr. Bush said he recognized that many displaced people lacked proper identification or even a change of clothes, and said the government would "cut through the red tape" to ensure that they receive the help they need. He encouraged evacuees to register with the Federal Emergency Management Agency to receive the immediate $2,000 in assistance and then longer term aid.

Mr. Bush announced his latest initiative as Democratic congressional leaders said they intended to boycott a proposed Republican-led congressional committee to investigate the administration's readiness and response to the storm.

"I do not believe that the committee proposed by Speaker Hastert and Senator Frist is in the best interest of the American people," said Sen. Harry Reid, D-Nev.

House Minority Leader Nancy Pelosi, D-Calif., said she won't appoint any Democrats to the joint committee, reports CBS News Correspondent Bob Fuss, because Republicans set it up on their own with a false claim that it is bipartisan, but it's actually designed to be a "whitewash."

Mr. Bush said that more than 400,000 families have registered with FEMA but tens of thousands more people still need to be processed.

"The responsibility of caring for hundreds of thousands of citizens who no longer have homes is going to place many demands on our nation," the president said. "We have many difficult days ahead, especially as we recover those who did not survive the storm."

Mr. Bush said the government also would relax requirements so that evacuees relocated far from home could receive state-administered federal benefits, such as Medicaid, welfare, child care, mental health and substance abuse treatment, food stamps, housing, foster care, nutrition for poor, pregnant women, school lunch and unemployment checks. He said states that are housing evacuees should "not be penalized for showing compassion" — meaning the government would reimburse them.

The developments unfolded as the Labor Department reported that an estimated 10,000 workers who lost their jobs because of the storm filed for unemployment benefits last week, the first wave of what likely will be hundreds of thousands of such claims.

CBS News Correspondent Bill Whitaker reports that in Mississippi, Hurricane Katrina tore down many casinos on the Gulf – washing away the $500,000 a day they pay in state taxes. Most of the 3,400 employees at one of the casinos, the Beau Rivage, could be out of work nine months to a year, Whitaker reports.

"The annual payroll was about $96 million. It's a big deal," said Bobby Baldwin of the MGM Grand Mirage.

Passage of Mr. Bush's call for $51.8 billion in funding was a certainty in Congress, although Reid was critical of the administration's plans for running billions of dollars through the widely criticized FEMA.

Administration officials said the money was needed by day's end, and one official said government costs were running as high as $2 billion a day in the wake of the hurricane that spread destruction along the Gulf Coast and led to flooding that left large portions New Orleans under several feet of water.

CBS News White House Correspondent Mark Knoller reports that Sen. Kay Bailey Hutchison, R-Texas, said that Republican leaders discussed appointment of a Katrina relief czar with President Bush on Thursday morning and that he is "very receptive" to the idea and, in fact, had already thought of that.

Other Republicans have told CBS News they are very concerned about the long-term political ramifications of the bungled relief effort and that the president needs to put someone in charge as soon as possible who has credibility and credentials.

In addition to his afternoon appearance, Mr. Bush dispatched Vice President Dick Cheney to the stricken region, and met with Republican congressional leaders at the White House as he struggled to shed the criticism that has followed him and his administration since the storm struck.

In Gulfport, Cheney inspected damage, said there was much recovery work to be done but added that he was struck by a "very positive, can-do" attitude.

With the death toll mounting across the Gulf Coast, the White House would not estimate how many people had died.

"It's going to be a very ugly situation when those flood waters recede and we start to go in and recover bodies and we look at the additional public health issues that need to be addressed," White House spokesman Scott McClellan said.