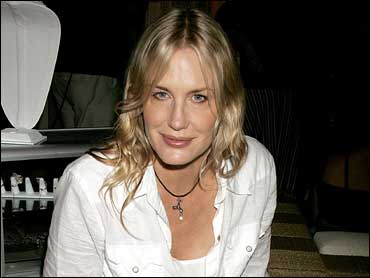 Daryl Hannah said she planned to meet with Ecuador's president Tuesday to discuss a lawsuit by Indians and settlers against Chevron Corp., a day after she trudged through the jungle to visit the polluted site.

San Ramon, Calif.-based Chevron is on trial in Lago Agrio, 110 miles east of the capital, Quito, for allegedly failing to clean up billions of gallons of toxic wastewater.

Hannah, 46, star of the 1984 movie "Splash," rolled up a sleeve of her shirt and dipped it into an oil pit, holding it above her head as the thick liquid dripped down her arm.

"Obviously they're suffering severely," she said by telephone from her hotel in the jungle town. "A whole host of horrors have come their way with the advent of supposed civilization."

The plaintiffs are seeking $6 billion in damages, claiming that Texaco Petroleum Co., which merged with Chevron in 2001 and spent three decades extracting oil here, dumped more than 18 billion gallons of oily wastewater into the rain forest, and failed to properly clean it up.

Chevron denies the allegations, and says Texaco, which ended its operations in 1992, followed Ecuadorean environmental laws in a $40 million cleanup that began in 1995.

Hannah said she plans to meet with leftist President Rafael Correa to discuss the case.

The Indians tried for a decade to have their case heard in U.S. federal court before shifting their battle to a makeshift courtroom in the ramshackle jungle town of Lago Agrio, which means "sour lake," where an Ecuadorean judge is hearing evidence.