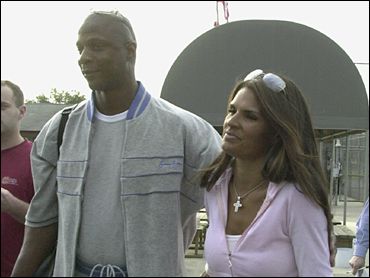 Darryl Strawberry walked out of prison Tuesday after serving 11 months of an 18-month sentence for violating probation on cocaine possession charges.

The former star baseball player, wearing a gray sweatsuit and sneakers, hugged his wife as he left the Gainesville Correctional Institution and said "Thank you" to a guard.

He then got into a car that was driven by another man. They went about a half-mile, then turned back to get Strawberry's personal belongings. A guard handed him a plastic bag and he was off again.

He made no comment to reporters. Strawberry also accepted the $100 check the state gives inmates upon their release, but declined a suit of clothes.

According to papers filed with the Florida Department of Corrections, Strawberry plans to move back with his wife, Charisse, and his three children in a gated community in Lutz.

Strawberry and his wife intend to stay in Florida for a few days before a trip to California, his attorney, Darryl Rouson, said.

"He's doing well," Rouson said before Strawberry's release. "He's been clean for a very long time, longer than ever before."

Although Strawberry was sentenced to 18 months, he received credit for the time he spent in a county jail awaiting sentencing and under Florida law, he has to serve only 85 percent of his sentence.

His imprisonment stemmed from a 1999 arrest for cocaine possession in Tampa. He later pleaded no contest to the charge. Strawberry violated his probation six times before being sentenced to prison by Hillsborough Circuit Court Judge Ralph Steinberg on
April 29.

The 41-year-old former All-Star outfielder has served his entire sentence at the Gainesville prison, a minimum- and medium-security facility about 135 miles from Tampa. Corrections officials have said he was a model inmate and had no disciplinary infractions. He had participated in the prison's 221-bed substance abuse program.

Strawberry worked on the grounds crew at the prison, which offered basketball and track as recreation. He was visited twice by his wife and once by a representative of the New York Yankees while imprisoned.

Strawberry was kicked out of an Ocala-area drug treatment facility in March 2002 after a series of non-drug infractions, including having sex with a female resident, smoking, signing autographs and being disrespectful.

Along with drug problems, he has been treated for colon and stomach cancer. Recent tests showed no signs of the disease.