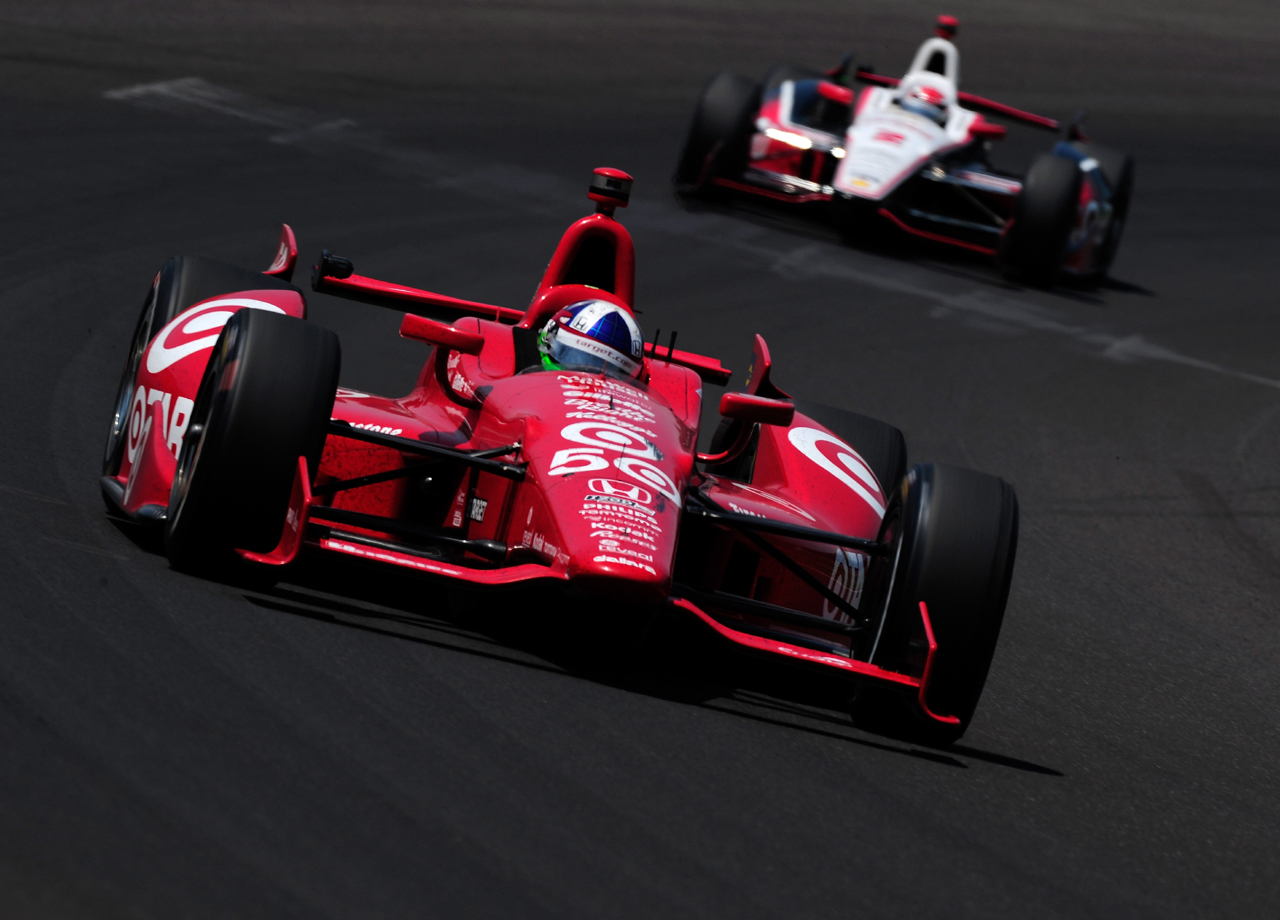 (AP) INDIANAPOLIS - Dario Franchitti stamped his name in the record books, the latest three-time winner of the Indianapolis 500.

But this was not about Franchitti: It was all for Dan Wheldon.

Third went to Tony Kanaan, making it a podium sweep for Wheldon's three closest friends in the IndyCar series. Wheldon, the defending race winner and a two-time champ, was killed in the October season finale, and the entire day was in honor of D-dub, their fallen friend.

"Everybody up there was a friend of Dan's, and that about sums it up. Everybody loved him," said Franchitti as bagpipes played over the public address system.

"What a race! What a race!" Franchitti said. "I think D-dub would be proud of that one."

Kanaan, who used a bold move on a late restart to dart from fifth to first, couldn't hold off Franchitti and Dixon on the last restart. It left him winless in 11 career attempts at Indy, but he was OK with the final result.

Wheldon's wife, Susie, went to Victory Lane to congratulate Franchitti, who hid his tears of joy behind a pair of white sunglasses worn in tribute because they were Wheldon's preference. She then sat next to Franchitti's wife, actress Ashley Judd, in the backseat of the convertible — the same seat she had a year ago for Wheldon's win — for the victory lap around the 2.5-mile oval.

The entire day was a tribute to Wheldon, beginning with car owner Bryan Herta driving a single parade lap around Indianapolis Motor Speedway in the car Wheldon drove to victory last year. Fans were given white sunglasses to wear on laps 26 and 98, marking the car numbers Wheldon used in his two wins.

It was Susie Wheldon's first trip to any race track since her husband's Oct. 16 death, and she watched from Dixon's pit stand with his wife, Emma. It was the Dixons who relocated after the accident to St. Petersburg, Fla., to provide comfort and support for Susie and her two sons in the months after the accident.

So it was fitting on this hot day — the temperature hit 91 degrees, just one shy of the Indy 500 record — that one of the most competitive races in history ended with a frantic push from Wheldon's friends. Ten drivers swapped the lead 35 times, shattering the record of 29 in the 1960 race won by Jim Rathmann.

Until the last lap, when Sato made his move for the win, the race was close but uneventful.

The only multi-car accident came when a spin by Mike Conway collected Will Power, who came into the race as the series points leader and winner of the last three races this season. It was a somewhat frightening accident as Conway, who broke his front wing when he hit one of his crew members on pit road, hit the outside wall and his car tilted on its side before coming to rest. And Helio Castroneves had to deftly maneuver past a bouncing tire that still grazed one of his own wheels.

Besides that, though, the race was slowed by just eight cautions — including the one on the last lap — for 39 of the 200 laps.

Marco Andretti, who went into Sunday believing the race "is mine to lose," was strong at the start, but a series of adjustments were not to his liking and he unraveled on his team radio before spinning to bring out the final caution with 13 laps remaining.

Franchitti and Dixon battled back and forth in the final third of the race, with Sato consistently in the mix. Then came Kanaan, from nowhere it seemed, but he was unable to hang on to the lead on the restart after Marco Andretti's crash brought out the yellow with 13 laps to go.

Everyone thought the race would go to a Chevrolet driver for either Andretti Autosport or Penske Racing, which won the first four races of the season and swept the front two rows in qualifying. But in the end, it was three Hondas fighting for their first win of the season.

After the restart with six laps remaining, Franchitti pulled past Dixon for the final time. Sato went with him and slid in front of Dixon to split the Ganassi teammates. The Japanese then went for the lead going into the first turn, pulling even with Franchitti. But he went in too low, the cars touched, and the crash sent him into the outside wall.

"It looks like he didn't give me enough room to go there," Sato said. "I was a little below the white line. I had nowhere to go."

Sato's car barely missed Franchitti, who coasted across the line under a yellow caution flag to become the 10th driver to win at least three Indy 500s. All three of Franchitti's wins have ended under caution.

This was the second year in a row that a crash on the final lap affected the outcome. In 2011, rookie JR Hildebrand was leading going into the final turn when his car slammed into the wall, allowing Wheldon to cruise past and take the checkered flag.

"I was side by side with Takuma," Franchitti said. "We hit and I managed to keep it out of trouble."

It snaps a disappointing start to the season for Franchitti, who has won the last three championships but seemed stumped by IndyCar's new car through the first four races. In breaking out Sunday for his 31st victory, he's now in a tie with Sebastien Bourdais and Paul Tracy on the all-time wins list.

One more win will move Franchitti into seventh place in the record books. The only drivers ahead of him? The giants of open-wheel racing: three Unsers, two Andrettis and A.J. Foyt, the all-time wins leader.