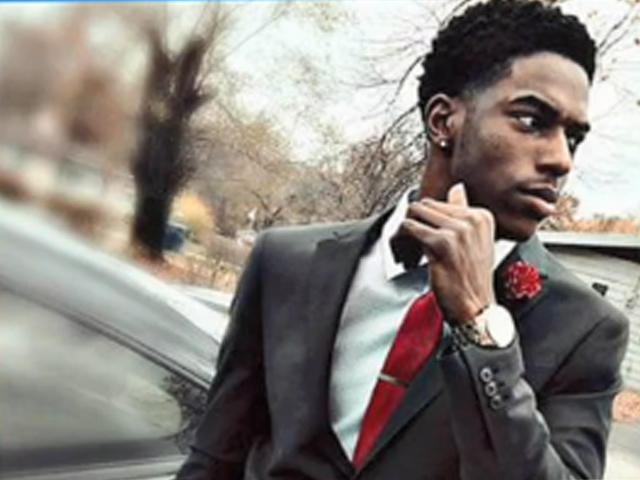 A grieving Missouri mother whose 24-year-old son was found dead hanging from a tree over two weeks ago continued to press St. Louis County police to investigate the death as a murder instead of a suicide. Melissa McKinnies addressed whoever may be connected to Danye Jones' death as she spoke to reporters Thursday.

"If you're out there, and you had something to do with my son's, my child's, death, the murder, the lynching of Danye ... Jones, you better start turning in on your folks," McKinnies said. Relatives found Jones hanging by a bedsheet from a tree behind the family's Spanish Lake home on Oct. 17.

St. Louis County police spokesman Shawn McGuire said Thursday that there were no signs of struggle or trauma to the body. "Detectives, based on all the physical evidence and the current thorough investigation, they are investigating it as a suicide," McGuire said in an email.

McKinnies, an activist, disagrees. Soon after Jones' death she posted photos on Facebook of her deceased son, with the words: "They lynched my baby."

Facebook took down the posting, but not before it began trending on social media sites such as Twitter and Reddit. On Thursday, McKinnies shared other details about what was discovered when Jones' body was found, CBS affiliate KMOV-TV reports.

McKinnies wouldn't go into detail about what that meant, KMOV-TV reports. She also said, "He had a knot on his face."

McKinnies told the St. Louis Post-Dispatch that her son was upbeat before his death, not suicidal. She said he didn't know how to tie the knots used in the ligature, and the sheet didn't match sheets from the family home.

Jones had packed an overnight bag found on the patio, suggesting that he trusted and had planned to leave the house with the person who killed him, McKinnies said. She and other activists are urging police to take a harder look at the possibility that Jones was killed.

McKinnies was active in the months of protests that helped spark the Black Lives Matter movement following the fatal shooting of black Ferguson teenager Michael Brown by a white police officer in August 2014. Officer Darren Wilson resigned and was never charged in the shooting.

Darryl Gray, a prominent St. Louis activist and a friend of McKinnies, said Ferguson activists are often harassed and threatened via text and social media. Gray said he found a package inside his car earlier this year.

Bomb squad investigators determined it wasn't an explosive — the package contained a 6-foot-long snake. Police continue to investigate the deaths of two prominent Ferguson protesters, both of whom were found killed inside torched vehicles — DeAndre Joshua in November 2014 and Darren Seals in September 2016.