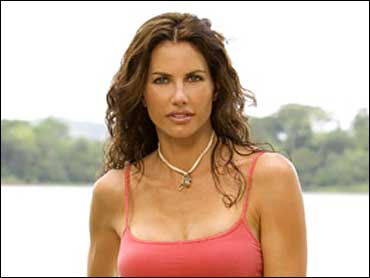 After all was said and done, Danni said it was $200 in cash that made the difference. With a large target on her back, Danni spent the money at an auction to win a crucial clue that would win her immunity – and ultimately a million bucks.

"It was money well-spent," said Danni of her 500,000 percent return on investment.

The evening started with four Survivors: Rafe, Stephenie, Danni and Lydia still alive in the jungle.

The group got a visit from a Mayan family who brought with them baskets, incense, and sugar. And a live chicken. The family treated the tribe mates to a traditional sacrificial ritual. Sugar was poured. Words were chanted. A bird was decapitated.

The chicken, which was tossed into a fire for the Mayan gods, was a charred carcass within minutes. But that didn't deter Stephenie, Lydia and Danni from feasting on it later that night. Rafe, ever aware of his moral compass, abstained.

The group endured a fierce lighting storm that night and realized maybe eating the sacrificed chicken had angered the Mayan gods. At tribal council, Gary shook his head disapprovingly upon hearing of the blasphemous feast.

But it would be Lydia who was sacrificed at the next tribal council. The maternal fishmonger from Washington State finally ran out of luck when Rafe won immunity and numbers were no longer on her side.

The next morning, another symbolic sacrifice would take place. Rafe, Danni and Stephenie took a tour atop a Mayan ruin to reflect on all the tribe mates who had been voted off. There was "Golden Boy" Blake, "One tough mama" Margaret, and "father figure" Gary.

After wistful reflections, the trio threw the faces of their fallen comrades into a fire.

And then there was the final challenge. The Final Three had to balance on a wobbly platform supported only by a small rope. But after slipping off, they each sat precariously against a pole at a painfully awkward angle.

Eventually Steph fell and Danni had won herself a guaranteed spot in the Final Two.

As Steph wept on the ground, Rafe ran to her aid. Amid the sea of emotion, Rafe told Danni that she was no longer obliged to keep her promise of taking him to the Final Two,

At the final tribal council, Danni voted Rafe out. The strategy was simple: Stephenie had backstabbed and enraged a few of the members of the jury and therefore Danni reasoned she'd have a worse chance against the kinder, gentler Rafe.

And then there were two – Danni and Stephenie.

"Steph and I are so alike," Danni said. "To outlast all the boys is kind of fun – two tough girls."

But the two would have to face the wrath of the Jury of 7 the next night.

Apparently she had forgotten about Judd. While most of the jury stopped short of showing outright bitterness, outspoken Judd did not hold back.

"Are you still starving? Because the only thing you should be starving for is my vote," Judd said. "You backstabbed everyone in the game … you crossed the line when you lied to my wife!"

At the live reunion in Hollywood, host Jeff Probst tallied the jury's votes. After receiving four of the first five, Danni was declared the winner.

"I felt like I did outwit," said Danni, invoking the show's slogan. "And I definitely outlasted."
By Stephen Smith