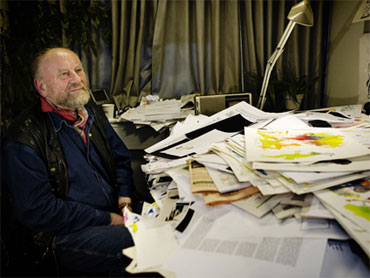 Danish cartoonist Kurt Westergaard, who caricatured the Prophet Muhammad and caused outrage in the Muslim world, said Monday he is quitting because he is getting old.

"One has to stop at some point," Westergaard said, adding that he has been working since age 23, first as a teacher and then as an artist. He turns 75 on July 13.

Westergaard said he hopes his retirement might help "to lower the terror threat" against the Jyllands-Posten newspaper where he has been working for the past 27 years.

There have been at least three terror attempts against Westergaard or his newspaper since he and 11 other artists angered Muslims by creating the Muhammad cartoons four years ago. Angry protesters in Muslim countries also have torched Danish and other Western embassies.

Westergaard's cartoon, which he said took him 45 minutes to draw, was considered by many Muslims the most offensive of the 12 drawings. He has rejected calls to apologize to Muslims, saying poking fun at religious symbols is protected by Denmark's freedom of speech.

In neighboring Sweden meanwhile, former Muslims from across Europe condemned last month's violent attack against Swedish artist Lars Vilks who also drew a cartoon about the Prophet Muhammad, depicting him as a dog.

The drawing in a local Swedish newspaper in 2007 infuriated Muslims, and last month angry protesters tried to burn down Vilks' home after he showed a film about Islam and homosexuality during a lecture at Uppsala University.

Representatives from ex-Muslim councils in Sweden, Germany, Britain and Austria voiced support for Vilks at a meeting in the Swedish capital, Stockholm.

Fariborz Pooya, chairman of the Ex-Muslim Council of Britain, said Vilks was not alone in his fight against radical Islam and called for "unconditional freedom of expression."

In Copenhagen, Westergaard said that he was quitting his profession with "a good conscience."

"I have done my bit for the newspaper, so it's really fine that I stop now," he said in a statement, posted on the newspaper's Web site. He was no available for comment.

"But the last five years have been especially emotional for both him and the newspaper," Mikkelsen said.

He said the paper decided to publish the cartoons "to discuss to what degree the public debate is exposed to intimidation from forces that want to cut off the freedom of speech."

"This initiative has proven more warranted and necessary than anyone had ever imagined," he said. "The fight goes on, and Jyllands-Posten always will be up front."

Westergaard has been in police protection since February 2008, when Danish newspapers reprinted his caricature in a gesture of solidarity after police revealed a plot to kill him.

Two Tunisians accused of planning to strangle Westergaard in his home were arrested. However, police failed to substantiate the charges against the men and released them. Both left Denmark.

In October, terrorism charges were brought against two Chicago men who allegedly planned to kill Westergaard and the newspaper's former cultural editor. That trial has not yet begun.

In January, a Somali with a residence permit in Denmark, broke into Westergaard's home wielding an ax and a knife, but did not harm him. Police arrested him, and he has been preliminarily charged with terrorism and attempted murder.