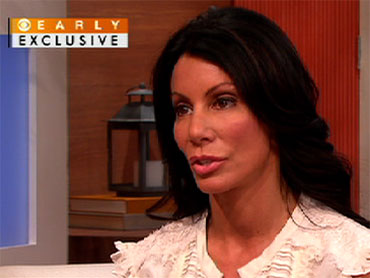 The Bravo network's reality franchise, "Real Housewives," has spawned six separate series, a phenomenon that's drawn millions of viewers. But none is more popular than the "Real Housewives of New Jersey."

Much of the drama in "New Jersey" last season centered around Danielle Staub, who was at bitter odds with the other housewives.

Often placed in the role of villain, Staub has been the target of acts of rage. In fact, fellow housewife Teresa nearly flipped a restaurant table onto her, and the daughter of another yanked her hair.

But in a two-part reunion that served as the season finale, the sparks really flew, inspiring Staub to storm off stage on two separate occasions.

Still, the show ended with the unimaginable -- Staub embracing her fellow housewives.

However, it was revealed on Tuesday that she will not be a real housewife of New Jersey in season three.

Staub said she wasn't fired and she didn't quit.

"I walked away," she said on "The Early Show" Thursday.

Staub, who tells her side of the story in her book "The Naked Truth: The Real Story Behind the Real Housewives of New Jersey," said, "It was a good time to leave. What was left -- kill me? There was no peace in two years. And I just felt like I had done all I could do. There was not going to be resolve."

She continued, "I made resolve and I made peace before I went to the reunion with myself. That's why I was able to sit calmly. I knew there was nothing left. And I just really wanted to get through it. And in the end, I didn't realize I was going to hug, but Teresa started yelling again. I just had to -- you know, that's the only way to stop her at that point. That was a very long day (of taping the show). It wasn't just an hour, like you see in an episode."

Read an excerpt of "The Naked Truth"

"Early Show" co-anchor Erica Hill said the hug seen on the reunion special was "one of the most awkward things" she's ever seen on TV.

She told Hill, "I really hadn't had an opportunity to even speak to her. We were at odds. And I think there was a lot that was drawn upon emotion for she and I because we were in a friendship, a very close friendship, for quite some time. And that was the first moment in two years, actually, that we really had just a dialogue going with the others around, that we were actually able to speak. And I got to hear how she was feeling without her being controlled. And it moved me to let her know, I wanted to whisper to her -- I know we were miked, but it wasn't my intent to be heard for anyone but her. I wanted her to know, I'm okay. I want to leave now. Just let me go. There's no more."

Staub said she felt her fellow housewife "exhale" when she was hugging her.

"It wasn't an uncomfortable moment for me," Staub said. "I can't speak for anyone but myself. I just know for me, it was something that came from my heart. I've been seriously abused most of my life. And it doesn't make me a victim. I'm a survivor. There's people that go through much worse than I. But I'm given a platform to maybe stop some of that kind of behavior. I did feel her exhale. I don't need her to admit that. I don't need anybody to admit that. I work on people's energy -- not work on them, but work with them and I feed off of that. So yeah, I was feeling a lot of closure between she and I."

As for her so-called villain status on the reality TV show, Staub said it was largely the product of the editing process.

She said, "I think editing is a beautiful, wonderful thing. It did make wonderful TV, but I do own up to -- I am a button-pusher, but do I have resolve at the end of the day and I don't mind being the villain."

As for the other women seen in the show, Staub says some received preferential treatment the cutting room floor.

"I think there was favoritism, to be honest with you," she said. "But that's okay. I'm the villain. I'm the most talked about."

And the most talked-about housewife isn't finished with the world of entertainment apparently. Staub said plans are in the works for to feature her, her family and "extensions" of her family. She wouldn't elaborate, but said her children want to be involved -- and didn't want to be part of her final season on "The Real Housewives of New Jersey."

"It's kind of tough seeing your mom go into lion's den constantly."