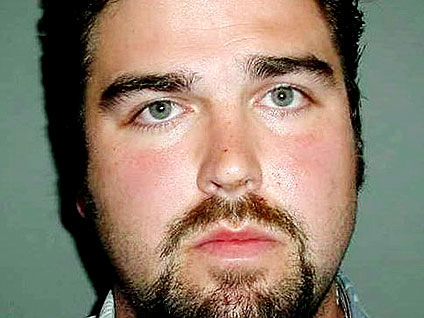 LOS ANGELES (CBS/AP) FBI agents and the Costa Mesa Police who have been searching a park in Long Beach have found a severed head that they believe belongs to a community college student and war veteran who was killed and dismembered in a double murder-for-profit plot.

With the help of cadaver dogs, the head, which is believed to belong to 26-year-old Samuel Herr, was found Saturday after two days of searching El Dorado Park, said police Sgt. Patrick Wessel.

The man accused of murdering Herr and his girlfiend Juri Kibuishi is Herr's neighbor, 26-year-old Daniel Wozniak. The part-time actor, who was supposed to be married Saturday, was charged with two counts of murder Friday and is awaiting his arraignment Tuesday.

Police say Wozniak who was desperate for money befriended Herr after he learned that the young man had served in Afghanistan and had recently come into a large sum of money, the Los Angeles Times reported Sunday.

Wozniak then hatched a plan to kill Herr and his girlfriend, drain his bank account, and possibly use the money for his honeymoon, reports CBS affiliate KCAL.

After using a 17-year-old boy to withdraw $2,000 from Herr's account, investigators believe Wozniak shot and killed Herr in a theater at the Los Alamitos Joint Forces Training Base. He then dismembered the body and scattered the limbs in El Dorado Park and left his torso in the attic of the theater, says KCAL.

Captain Ron Smith of the Costa Mesa Police told KCAL, "We figured it was a way he was trying to avoid us identifying the deceased so he could continue with his crime."

Wozniak allegedly continued his gruesome murder plot and shot Kibuishi after he summoned her to Herr's apartment via a text message from her boyfriend's phone. He then removed her clothing to make it appear that she was a victim of sexual assault.

On Friday, an arm and a hand were found at the park, but have not yet been deemed Herr's remains, Sgt. Wessel said.

The alleged gunman's father says his son is currently in a coma after he tried to commit suicide after his Wednesday arrest.