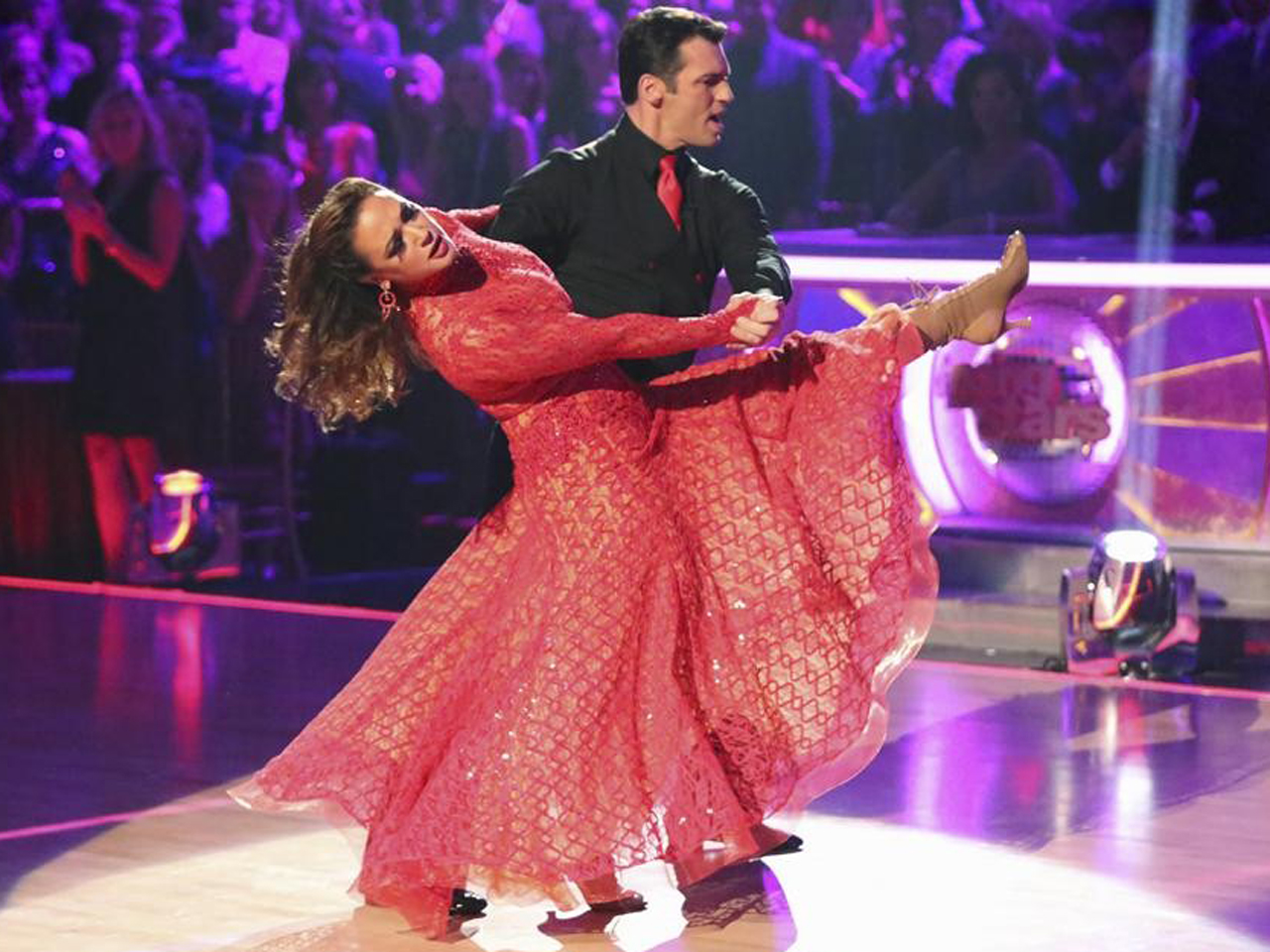 The ballroom numbers are dwindling fast on season 17 of "Dancing with the Stars."

Monday night saw another celebrity pair exit the ballroom -- and it may not be the couple you would have expected.

The episode featured a mixture of laughter, tears and the return of former cast member Maksim Chmerkovskiy, who didn't show off his dancing skills, but rather critiqued the remaining contenders as a guest judge. Chmerkovskiy was able to offer an insider's perspective, often making notes on the celebrity dancers, mostly dishing out lots of praise for his pro-dancer pals. He also shared many of Carrie Ann Inaba's sentiments, joking that "a little disturbing" that he was agreeing with his fellow judge so much.

Mostly, it was a stellar night for this season's dancers. Amber Riley and Derek Hough wowed the judges with their jazz dance to Bruno Mars' "Locked Out of Heaven." During round 2, their Viennese waltz received plenty of praise. Bruno Tonioli said, "You dance like an angel." Inaba called the "Glee" star "so special," while Chmerkovskiy called her "amazing."

Karina Smirnoff and Corbin Bleu took on a sexy tango for their first dance. Smirnoff said she was a little anxious having her ex Chmerkovskiy on the panel, saying, "Maks and I were engaged at one point, so I think it could go either way for Corbin and me, but hopefully it'll go the good way." In the end, it turned out "great," Chmerkovskiy said. Inaba called it "the fastest, most intense tango ever." Next up was another sexy routine -- the rumba, which Bleu performed shirtless. Inaba said she thought his body was a "wonderland." Chmerkovskiy complimented Smirnoff, calling her "one of the top five female dancers in the competition." Smirnoff must have liked hearing that from her ex -- she ran over to the table and planted a kiss on Chmerkovskiy's cheek.

Jack Osbourne may have been feeling "not so hot" during rehearsals, but he made up for it with two solid dances, which brought his mother, Sharon Osbourne, to tears as she watched him perform. The judges liked his performances, too, with Tonioli calling one "very very good." He was "in the zone," Inaba said. At one point, Osbourne lifted Cheryl Burke above his head during a jazz routine to The Police's "Roxanne."

Actress Leah Remini knew she may not be in the competition for the long haul, saying, "This could be the end of the line for me, so I'm really hoping I knock it out of the park." Her first dance to Lady Gaga's "Bad Romance" was solid, but the judges agreed that she should let her personality shine through some more. The same sort of feedback came for round 2. The former "King of Queens" star did an Argentine tango that received some mixed feedback. The judges wanted to see Remini exude more confidence, but noted that she's come a long way since the start of the competition.

Comedian Bill Engvall went into the night surprised he had actually stayed in the competition this long. "There's only one thing left for us to do -- finish this bad boy out," said Engvall, who had been suffering from a groin injury. He and pro-partner Emma Slater kicked things off with a cha cha. Chmerkovskiy, for one, was impressed, saying, "I don't believe in talent. I believe in hard work ... You're amazing. A lot of people are looking up to you for even attempting this." Although he's clearly not the best dancer of the group, the judges agree that his presence has added a lot to the competition. Inaba thanked him for bringing "the joy" to the competition.

Engvall and Slater ended up with the lowest overall score, but they managed to move on to the next round. The eliminated pair? Remini and Tony Dovolani were sent packing.

"I take away so much," Remini said through tears. "I have to thank Tony. He's put in so much work ... This has been an amazing experience...Everybody has been amazing."

Dovolani added, "I've never looked so forward to practices every single day. This was an incredible experience. If every season is like this, I will be living a very long life."

This season of "DWTS" is almost coming to a close. Finals are Monday, and the mirrorball trophy will be handed out Tuesday.

Tell us: Did the right pair go home?