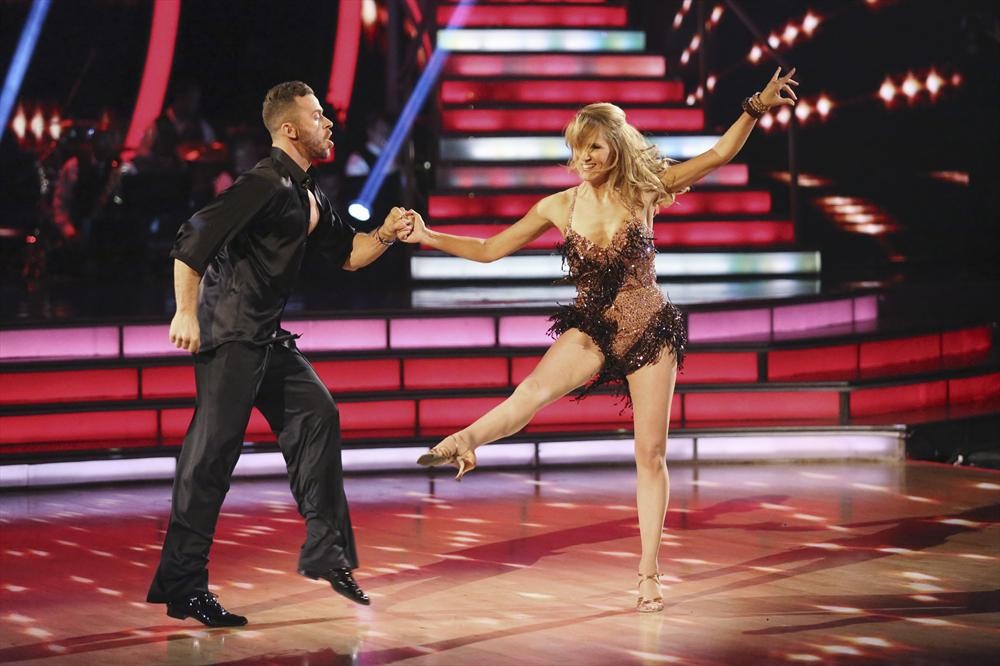 So, with a packed show and lots of dances, it wasn't hard to find some great choices for the best, worst and weirdest moments. Let's dive in!

Alfonso and Witney Set The Tone - Alfonso Ribeiro and his pro partner Witney Carson were the first to perform, and they really set the tone for the evening with a classic dressed-to-the-nines number featuring Alfonso in a full tux and Witney in a stunning red and sheer gown. It had all the flair and class we've come to expect, along with solid technical prowess.

Lea Gets Super Racy- After fans suggested that she dressed like a cougar, Lea Thompson ran with the cat theme. She and Artem did a Samba set to "Animals," and at certain points it looked like she was going to just start having aggressive, insane-person sex with Artem on the dance floor. But, in a good way, somehow. Anyway, it was a great progression from their "dated" routine last week.

Bethany and Derek Get Emotional - For their Waltz, Bethany Mota pulled from her deep well of emotions to craft a beautiful and heartfelt dance with Derek that simulated the heartbreak, pain, joy, fulfillment and vulnerability found in all burgeoning relationships. Not only did she pull it off, but the judges appreciated her efforts with a solid score.

Alfonso, Witney and Lindsay's Jaw-Dropping Trio Dance - After setting the tone with a wonderful couple's performance at the start of the night, Alfonso raised the bar again with his trio number. The Fresh Prince of Bel-Air actor, Witney and their guest pro Lindsay did a paso doble set to "Turn Down For What?" That description alone really should be enough to understand why it was one of the best moments of the evening.

Janel and Val Finally Kiss - Fans have been waiting for weeks now to see Janel and Val kiss on stage. On Monday night's show, fans got to choose the dance, the song and the costumes, but the ETonline audience had the exclusive chance to make the kiss happen. ETonline readers voted on who Janel would kiss at the end of the routine - Val, Len or Bruno - and their choice would be incorporated into the dance. As it turns out, we all wanted to get this sexual tension out in the open, but it feels like it might have only made the tension greater.

Tommy Chong Moves Forward - Right at the start of the show, it was announced that Tommy Chong would be moving into the semi-finals. Don't get us wrong, Tommy seems like a very nice, funny guy. But he is miles behind every other star, and now one of them had to be cut instead. It's just further proof that "DWTS" doesn't have enough to do with actual dancing.

A Pro Messes Up - If a dance ever goes poorly, it's almost always the fault of the star and not the pro. However, when Janel Parrish and Val Chmerkovskiy performed their beautiful routine, Val's patent leather shoes stuck together causing the dance's only misstep. However, the judges still said it was the couple's best dance of the night.

Tommy Chong's Absolutely Crazy Trio Dance - Wow, two entries in the "Worst" section. Chong's trio dance was basically just him sexually harassing flight attendants to Jason Derulo's "Talk Dirty." To be fair, isn't that basically what "Talk Dirty" - and most other Jason Derulo songs - are kind of about?

The Post-Apocalyptic Chair Sculpture - Bethany, Derek and a returning Tony Dovolani did a leather-clad Mad Max-themed number which was perfectly wonderful and sexy. But who could possibly pay attention to the routine with that massive chair-sculpture that looks like it's keeping back a horde of wasteland marauders?! There's no doubt that it looked cool, but it was more than a little distracting.

Mark Ballas' Shirt - Be careful not to look too closely while he dances because its bizarre black and white fractal hounds-tooth pattern could potentially cause seizures. That's just science.*

*It's not really science.

Tommy Chong's Possible Dance Movess- This week, fans submitted their suggestions for the dance style, music and costuming of the couples. Clearly, fans of Chong have vivid imaginations. One fan suggested Chong come out shirtless, on a unicorn. Another suggestion was to just have dogs running around the stage as they danced, for some reason. "DWTS" was more than happy to Photoshop these suggestions. However, Chong and Peta ended up going for a more traditional style for their Viennese Waltz.

ELIMINATION (CAUTION: SPOILERS) - Well, there wasn't going to be a good outcome no matter what. As soon as it was revealed that Chong would be safe and going into the semi-finals, it automatically meant that someone who was actually good and could dance was going home.

Finally, it came down to Sadie Robertson and Mark Ballas alongside Lea Thompson and Artem Chigvintsev. Both couples are great dancers, both are wonderful entertainers and both have loyal fans. But Thompson found herself going home, and the whole cast of the season could feel the show get a little sadder.

Next week, the "DWTS" semi-finals begin. Tune in to see the five remaining couples dance their hearts out in pursuit of the coveted mirror ball trophy.

Will Alfonso steal the show again, as he's already done twice before? First he busted out the Carlton, and then revealed that he and his wife were expecting their second child.

Check out this video below for more from Alfonso on his grand announcement.