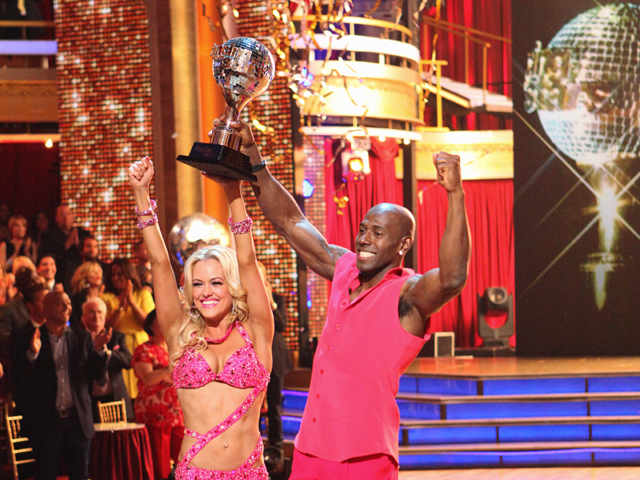 (CBS News) "Dancing with the Stars" is a popularity contest, as much as it has anything to do with dancing.

Who might you think won - at least in the voters' eyes?

Pictures: "Dancing with the Stars" Season 14
Timeline: Highlights from past "DWTS" seasons

But it would take two hours to get to a final result. First, we had to see a little backstage footage. For example, Levy and Cheryl Burke called head judge Len Goodman "predictable," the same word with which he'd predictably labeled their freestyle routine.

Mark Ballas accused Jenkins of panicking. We saw Jenkins cross herself before the freestyle. See? No panic there.

But they were all to be given one more dance. Would the judges abdicate their responsibility and leave it all to the viewers' voting? Of course they would. Why ruin a tradition?

We would be kept wondering for a while, mind. For first we had to watch reprises from those whom fate had cast aside - the likes of Sherri Shepherd, who enjoyed what she called a "Chmerkovskiy sandwich," something Melissa Gilbert had also previously experienced.

It's certainly one way of filling time - bringing back all those whom the viewers thought not very good to remind them just how not very good they had been - but it may not have been the most riveting. Yes, Gavin DeGraw still wore a hat, he's still a nice man and he still can't dance.

In between all these time-fillers, the producers kept checking back with the contestants, who had only been given the music for their final dances 24 hours previously.

The likes of Gladys Knight and Jaleel White paraded through one more time. Knight played herself, White played Shaft. Roshon Fegan passed through too, before Kelly Clarkson made one of her regular reality show appearances. The "Idol" alumna has managed to appear on "The Voice" as well as "Dancing with the Stars" this year. One has to wonder whether she'll shortly be on "Celebrity Apprentice." One can only hope not. Here she sang the only possible anthem for the "stars" who are dug out of cobwebs to perform on this show: "Stronger (What Doesn't Kill You)."

It took one hour and 17 minutes of this amusement before we had any "competitive" dancing. Finally, we had Levy and Burke offer their final salsa. Within four seconds, Levy was waggling his white-trousered bottom like an upper-class Chippendale looking for a very large tip.

"If salsa and rhythm were in the Olympics, you'd get a gold medal," said Goodman. He had given more 10s to Levy than to any other dancer in this competition. Tonioli offered his usual lexicon of "saucy," "sexy" and words in the same vein. Oh, look. The judges gave them three 10s.

In rehearsals, Jenkins became nostalgic. She wept. She uttered cliches about the "experience."

In her jive, she gave up every last element of energy she possessed. However, the energy dances haven't quite been Jenkins' best. They tend to reveal a little diffidence, rather than exposing any excessive exuberance.

"Your range is superb," said Tonioli.

"I want to thank you," said Carrie Ann Inaba. She believed that Jenkins and Ballas had set the standard for the whole season - which, to be true, did enjoy some of the better dancing of recent years.

Jenkins began to gush about how welcome she'd been made to feel in America. Then the judging politburo raised their paddles in acclamation. Yes, they gave them three 10s.

This was beginning to feel spectacularly pointless. If they could really see no difference between these dances, no flaws, no missteps, not even a separation in entertainment value, what was the point?

For our last dance, we had the almost saddeningly competitive Driver. During rehearsals, his partner, Peta Murgatroyd, wept. Driver, as left the rehearsal room for the final time, gave it a look as if this was Lambeau Field after a freak earthquake had destroyed it.

Driver began in a very brave all-pink outfit - but not for long. He took off his shirt and smeared Inaba's face with it. She seemed very excited about that.

This cha-cha exposed yet more of Murgatroyd's body. Her dress consisted of nothing more than discarded confetti from a recent wedding.

The dance also exposed the good and the bad of Driver. He is athletic, but he tends to stop after every move, before starting abruptly again for the next. There is little fluidity. It all resembles a step class, rather than a dance.

In the audience, previous winner Emmitt Smith, whose moves had been far more natural, applauded.

"I can see your love for the show," said Inaba. "You are the one to beat."

Goodman insisted that all three couples had won. He also said that Driver was the best ever of all the footballers who had graced the show. Well, better than Jerry Rice, certainly.

Tonioli said he had "the strategy of a champion." He had listened to the judges, improved every week and peaked at the right time. This was true, save for the fact that it was largely nonsense. Driver's freestyle had been the most entertaining, but his essential woodenness had dogged him from the very first whistle.

You will be stunned into eating quinoa for breakfast when I tell you that the judges mulled it over and decided that this dance was worth three 10s.

Clearly these judges' scores cannot have impacted the scoring from the night before and the voters. While the accountants supposedly fingered their abacuses and their Google calculators, Gladys Knight sang "The Way We Were." While she sang, footage of the finalists was projected on large screens. Driver admired, Jenkins wept.

And so we came to the announcement of the third place couple. Driver and Jenkins both looked as if they would have eaten a garlic coyote just to get their hands on the mirrorball. Levy seemed plain tired. It was his name that was announced as having come third.

So who would be the winner? The famous footballer? Or the classical singer of whom few had ever heard?

Driver, Murgatroyd and Jenkins all, by this stage, looked fit to burst from their clothing. Meanwhile, Jenkins' partner, Ballas, stood sweetly impassive, looking around, wishing they would get on with it so that he could grab a pint of pale ale.

Driver's celebration was frantically excessive. He jumped around, rolled around on the floor and lifted Murgatroyd to within an inch of the rafters. He declared himself to feel "amazing."

"And now the moment you've been dreaming about," said host Tom Bergeron, without hint of irony, as the mirrorball trophy was to be presented.

Driver had been perhaps the fourth - or fifth - best dancer of this season. But why quibble? It's all just a little fun, isn't it?

Central Park birder gets his own TV show
Chris Matyszczyk