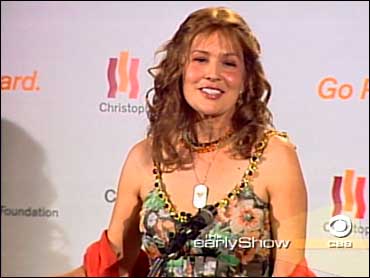 Reeve came to be viewed as a symbol of courage, along with husband Christopher Reeve, as she stuck by his side during the struggle that wound up killing him.

Christopher, the star of the "Superman" movies, was paralyzed in a horse-riding accident in 1996 and died last year. Dana's mother died shortly afterward. Then in August, Dana announced she had inoperable cancer.

But, reports Michelle Miller, Dana told a fundraiser in New York on Thursday night that things are looking up for her on the medical front.

"It's been an incredible year of going forward!"

Dana made the remarks to a fundraiser for the Christopher Reeve Foundation. A spokesperson says the event brought in $2 million for the group.

But Dana's health was the headline at the charity's annual star-studded gala.

Hollywood's A-list came out to support not only her cause, but her perseverance.

"I really think that Dana is a living saint," Catherine Zeta-Jones told the audience.

Zeta-Jones and husband Michael Douglas got the group's "Spirit of Courage" award.

"She looked great," Dr. Roman Perez-Solar, chairman of the Oncology Department of Montefiore Medical Center in New York told Mioller. "But, you know, that's not really so unusual these days with many patients with lung cancer."

He noted that people "think this is a disease of smokers, but in reality, between 10 and 20 percent of our patients have never smoked, like her."

Reeve told the crowd she's not backing down from the fight, a lesson she learned well from her late husband.

"He taught me so much about courage and going forward," she said, "and he really lives with me in this."