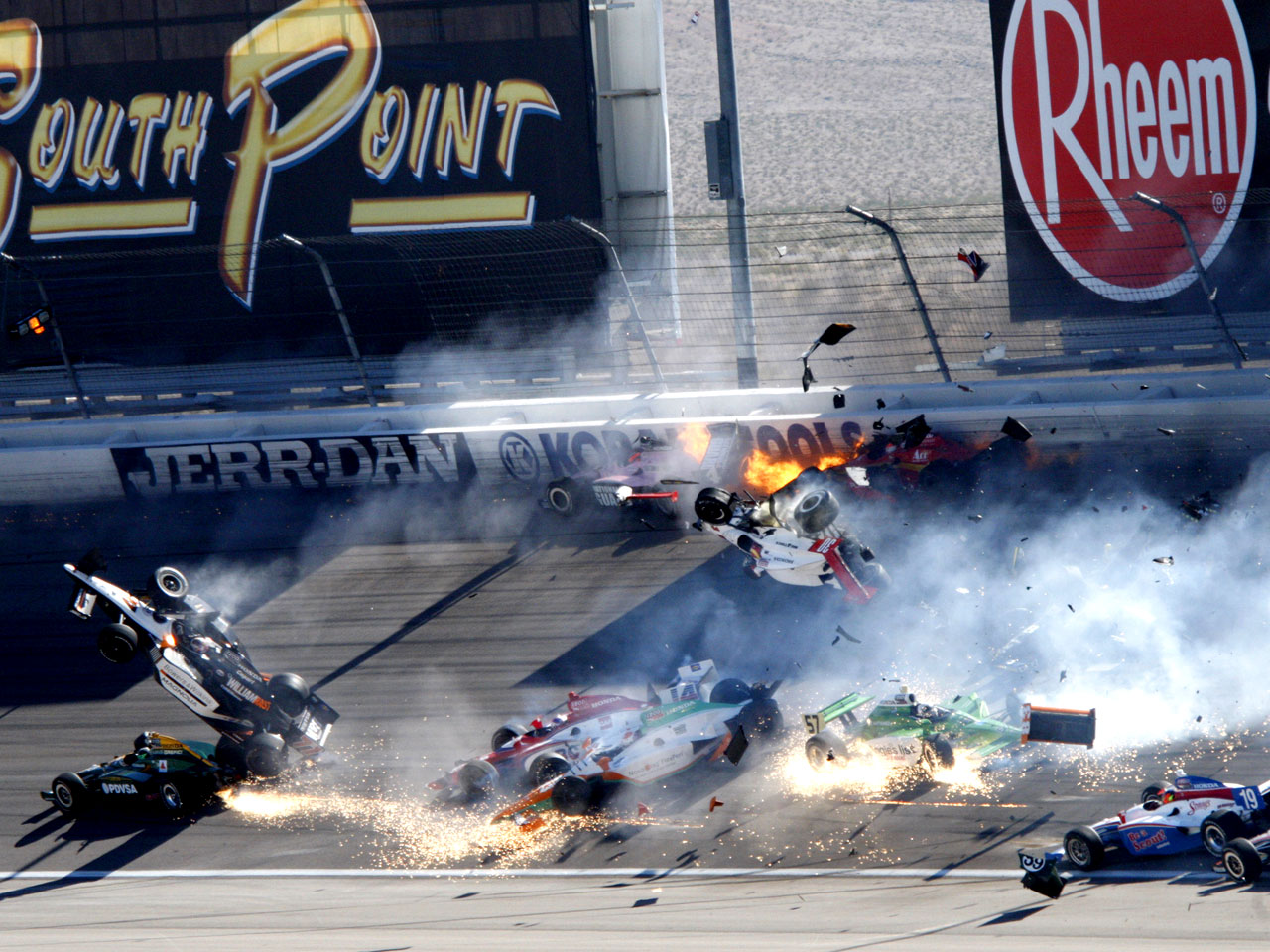 LAS VEGAS — Indianapolis 500 winner Dan Wheldon died Sunday at Las Vegas Motor Speedway after his car became ensnared in a fiery 15-car pileup, flew over another vehicle and landed in a catch fence just outside turn 2.

The 33-year-old racer was a two-time Indy winner, including this year's race.

Three other drivers, including championship contender Will Power, were hurt in the pileup during Lap 11.

Wheldon was airlifted from the track to University Medical Center; about two hours later, his colleagues were told of his death by IndyCar CEO Randy Bernard, who said Wheldon's injuries were "unsurvivable."

"One minute you're joking around at driver intros. The next, Dan's gone," said Dario Franchitti, whose wife, actress Ashley Judd, had to bring him a box of tissues. "I lost, we lost, a good friend. Everybody in the IndyCar series considered him a friend. He was such a good guy. He was a charmer."

With the race cancelled, drivers, many sobbing openly, took part in a five-lap salute around the oval in honour of one of the sport's biggest stars.

The race was only minutes old when Wheldon, who started at the back of the 34-car field and was in position for a US $5-million payday if he had won, couldn't steer clear of a wreck that started when two cars touched tires.

Within seconds, several cars burst into flames and debris covered the track nearly halfway up the straightaway. Some points of impact were so devastating workers had to patch holes in the asphalt.

Video replays showed Wheldon's car turning over as it went airborne and sailed into what's called the catch fence, which sits over a barrier that's designed to give a bit when cars make contact. Rescue workers were at Wheldon's car quickly, some furiously waving for more help to get to the scene.

"When we came around after the caution (flag) was thrown, I can't even describe to you what the scene looked like on the race track from our point of view," rookie driver James Hinchcliffe of Toronto told ABC. "It was unlike anything I'd ever seen before in my life."

Added Ryan Briscoe: "I'll tell you, I've never seen anything like it. The debris we all had to drive through the lap later, it looked like a war scene from Terminator or something. I mean, there were just pieces of metal and car on fire in the middle of the track with no car attached to it and just debris everywhere. So it was scary, and your first thoughts are hoping that no one is hurt because there's just stuff everywhere. Crazy."

Wheldon, who came to the United States from England in 1999, won 16 times in his IndyCar career and was the series champion in 2005.

Despite winning this year's Indy 500, Wheldon couldn't put together a full-time ride this season. He was racing in Las Vegas on the same team as Alex Tagliani of Lachenaie, Que.

"It's a very sad day," Tagliani said on his Twitter account. "He was my little brother from another mother."

Also injured in the crash were JR Hildebrand and Pippa Mann. Both will remain in the hospital overnight. IndyCar said Mann was being treated for a burn to her right pinkie finger and will be released Monday morning; Hildebrand was awake and alert but will be held overnight for further evaluation. Power was evaluated and released. An autopsy was planned Monday for Wheldon.

IndyCar has not had a fatality since Paul Dana was killed at Homestead in 2006, during a crash in a morning warmup.

Some of those cars slowed, others didn't, and others spun in front of Wheldon and Power. There was so much chaos on the track it was hard to tell who was driving what car.

Power appeared to fly over Alex Lloyd's car, rolling into the catch fence and landing on its right side. His in-car camera showed one of the front tires coming toward him in the cockpit.

Wheldon then appeared to drive over a car driven by Toronto's Paul Tracy, who seemed to be slowing down. Wheldon, however, went airborne and spun into the fence.

The track was red-flagged following the accidents while crews worked on fences and removed smashed cars.

"It was like a movie scene which they try to make as gnarly as possible," said Danica Patrick, making her final IndyCar start. "It was debris everywhere across the whole track. You could smell the smoke. You could see the billowing smoke on the back straight from the car. There was a chunk of fire that we were driving around. You could see cars scattered."

Weldon landed in this race thanks to Bernard's promise of (Canadian) $5 million to any moonlighting driver who could win the IndyCar season finale at Vegas. Although there were no takers, Bernard didn't scrap the idea, and Wheldon was declared eligible for the prize.

Wheldon had been providing blog posts for USA Today in the days leading up to the Las Vegas race, and in one posted Saturday to the newspaper's website he spoke of how he expected Sunday to be "pure entertainment."

"This is going to be an amazing show," Wheldon wrote. "The two championship contenders, Dario Franchitti and Will Power, are starting right next to each other in the middle of the grid. Honestly, if I can be fast enough early in the race to be able to get up there and latch onto those two, it will be pure entertainment. It's going to be a pack race, and you never know how that's going to turn out."

Drivers had been concerned about the high speeds at the track, where they were hitting nearly 360 kilometres per hour during practice.

"We all had a bad feeling about this place in particular just because of the high banking and how easy it was to go flat. And if you give us the opportunity, we are drivers, and we try to go to the front. We race each other hard because that's what we do," driver Oriol Servia said. "We knew if could happen, but it's just really sad."

"Things happen in this kind of racing," he said. "It's so close. Not much room for error. I was near the front of what caused all this, so I'm not thrilled about it. At this point, whose fault it was is kind of immaterial."

And Franchitti said: "I agree. We'll discuss that and sort it out."

The accident spoiled what Bernard had hoped would be a showcase event for the struggling IndyCar Series.

The second-year CEO worked the entire season on turning the finale into a spectacle and said he'd offer his resignation to the IndyCar board of directors if ABC's broadcast didn't pull a .8 ranking. His goal was to improve upon last year's season finale's horrible television rating and give the series some momentum for what's hoped to be a strong season in 2013 with the introduction of a new car and new manufacturers.

So Bernard poured everything into Las Vegas, renting the speedway from owner Bruton Smith and agreeing to promote the event himself. He landed enough sponsorship to at least break even on the race, and the (Canadian) $5 million challenge bought him an enormous amount of publicity the entire year.

Bernard got the Las Vegas Strip to close to stage a parade of cars, hosted industry parties and a blackjack tournament all to boost interest in the race. He even got MGM Grand Resorts to offer a pair of tickets to anyone staying this weekend in one of the chain's 14 properties.

But what was hoped to be a day of celebration quickly turned sombre.

When drivers returned to the track for the tribute laps, Wheldon's No. 77 was the only one on the towering scoreboard. Franchitti sobbed uncontrollably as he got back into his car for the memorial ride. The sound of "Danny Boy" echoed around the track, followed by "Amazing Grace." Hundreds of crew workers from each team stood at attention in honour of Wheldon.

"What can you say? We're going to miss him," Ganassi said. "Everybody in IndyCar died a little today."