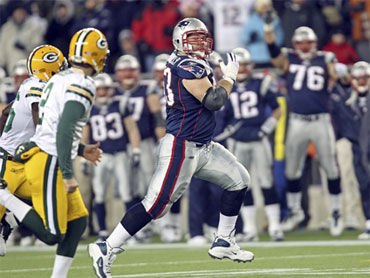 Offensive linemen may be the unsung heroes of football teams. There's no glory in holding off charging linebackers for play after play. It's not a "skill" position. You don't get to notch turnovers or score touchdowns or even - except for snapping and falling on fumbles - touch the ball.

So when New England Patriots guard Dan Connolly returned a kickoff 71 yards Sunday night against the Green Bay Packers, you could say it was a big day for the little guy.

Except that Connolly is listed on the Patriots roster as 6'4" and 313 pounds, so let's call it a big day for the big guy.

The return came not in garbage time of a blowout but late in the second quarter of close game. Packers kicker Mason Crosby hit a chip shot that bounced to Connolly, who was set to lead-block for the Pats returners. What followed was the seemingly unsurprised Connolly doing his best impression of DeSean Jackson/Joshua Cribbs/Devin Hester/[your favorite return man].

He starts out protecting the ball with both arms, runs through the first group of defenders, makes his way to the left sideline, stiff-arms a defender, and then cuts back inside with the end zone in sight.

Sadly, Connolly was taken down from behind just four yards from pay dirt, but the return was still the longest ever by an NFL lineman, and set up a New England score to pull within three; The Pats went on to win.

Naturally, NBC commentators Al Michaels and Cris Collinsworth played the clip again and again and again. But if you still haven't seen it, it's definitely worth a look.