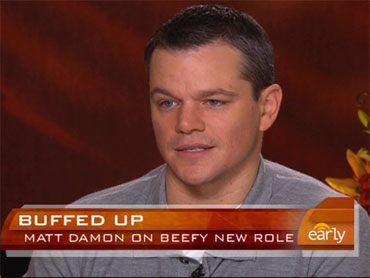 Now, the historic sporting event is the inspiration for the film, "Invictus," which stars Morgan Freeman as Nelson Mandela and Matt Damon as a rugby captain faced with an enormous task.

Although Damon is very convincing as a rugby player, he admitted he didn't really know the game that well.

"A couple of my roommates in college played and so I've been to some rugby matches, which seemed to me like just kind of 'kill the man with the ball,' and then they all drink beer afterwards. You know? That was kind of what I took away from it back then," Damon told Early Show co-anchor Harry Smith. "It's a brutal game. ... It's a great game."

Damon's character, which is based on the real captain of the rugby team in 1995, is called upon by Mandela and faced with the challenge of healing a nation.

"In order to build our nation, we must all exceed our own expectations," said Mandela (Freeman) in the film.

"Pretty interesting mandate for a sports team -- win a World Cup and unite a racially-divided country, where the majority of the people in the country hate your guts because you represent the old regime," Smith said.

"Right -- and that was the brilliance of Mandela, really," Damon said. "I mean, it's the conundrum of Mandela, still. You know -- a guy who is in prison for 27 years and comes out and everybody's looking to him. And the first thing he does is forgive -- forgive his jailers."

"Our enemy is no longer the Afrikaner. They are our fellow South Africans, our partners in a democracy," said Freeman in the film.

"Yeah. I mean well, it's hard. You know?" Damon replied. "Obviously the first time I saw him, you couldn't help but wonder what it's going to be like and what he's going to do," Damon said. "I mean, talk about a big responsibility! But Mandela had said to him years ago, 'If there's a movie made about me I want you to play me,' to Morgan. And he just fell into it. And he was just utterly believable."

Damon undergoes two physical transformations in the film -- buffing up his physique and nailing a difficult South African accent.

"Well, the accent, I had about six months to work on it. That is a really tough accent to do," Damon admitted.

According to Damon, you have to position your tongue in a different way, "so for each word, you're trying to do gymnastics in your mouth, basically."

Damon indeed physically measured up for the role.

Of course, Damon is very convincing in his role as a South African rugby champ. "Invictus," which means "unconquered" in Latin, was directed by Clint Eastwood and opens Friday.