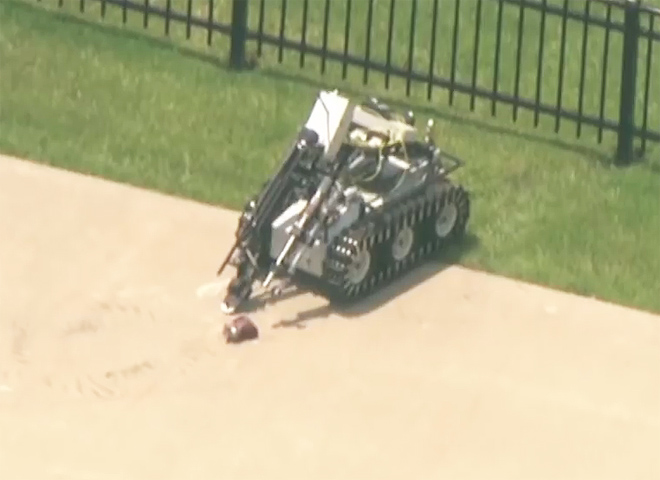 Dallas Police face questions this morning over the method used to kill the sniper in last week's officer ambush. Police sent a robot armed with explosives to kill the gunman.

Robots in the past have stopped a lot of dangerous situations. They can do pretty much anything a person can do: go upstairs, communicate via speakers, and use cameras to explore a scene, and at least one has been deployed to spray tear gas to subdue a suspect.

But using a robot to kill? That was new for a domestic police force, and it's raising questions.

Correspondent Kris Van Cleave says that departments with similar capabilities are facing criticism for using devices some believe belong in the military.

Hours after Micah Johnson opened fire in downtown Dallas, he was cornered by police. During negotiations, he told police there were bombs around the city and he threatened to kill more officers. The mayor of Dallas says there were no other options than to send in a robot strapped with the explosive C-4.

"We asked him, 'Do you want to come out safely or do you want to stay there? We're going to take you down,' and he chose the latter," said Mayor Mike Rawlings.

Last June Dallas Police used a similar bomb disposal robot to detonate pipe bombs inside a suspect's van. Models like it can use explosives, a water cannon, or high-powered air to disrupt suspicious devices.

In Rockville, Md., Montgomery County Fire and Rescue Department operates one of several bomb squads in the Washington, D.C. area. The team's robots can detect bombs and provide eyes in dangerous situations

"These things clearly save lives," Chief Scott Goldstein told Van Cleave. "It can be repaired, it can be replaced. You can't replace a highly-trained and experienced member of the squad."

But critics say robots like these were designed for military combat.

"It raises a lot of concern about the increased weaponization of robots that the police use," said Peter Asaro, a co-founder of the International Committee for Robot Arms Control. The deadly use of the explosive C4 attached to the robot in Dallas is used by the military in combat situations.

"Once, I think, police departments have these kinds of weapons in their arsenal, it provides the opportunity to use them in a lot of different kinds of scenarios," said Asaro.

Fifty-four-year veteran police chief Dan Montgomery says it's not a bad thing. He calls the Dallas deployment against Johnson "genius," and compares its use to a high-tech version of sniper fire.

"If you've got a robot that has C4 explosives, someone's got to detonate that, so it's the same as pulling a trigger," he said.

Montgomery is one of about 40 fire departments across the country that operates its own bomb squad. Chief Goldstein says he doesn't see these as killer robots, in part because they are operated remotely, and they don't come weaponized.

2016 saw increase in number of police killed in line of duty
More
Thanks for reading CBS NEWS.
Create your free account or log in
for more features.
View CBS News In
CBS News App Open
Chrome Safari Continue
Be the first to know
Get browser notifications for breaking news, live events, and exclusive reporting.