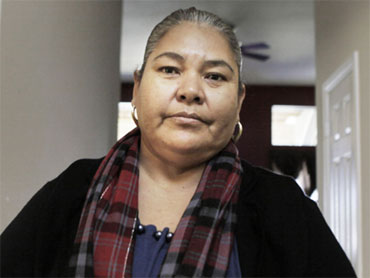 DALLAS (CBS/AP) Ernestina Mondragon understood she would have to pay a fine when a rookie Dallas police officer ticketed her for making an illegal U-turn.

But it was the ticket he gave her for being a "non-English speaking driver" that shocked her.

She wasn't the first.

The discovery came after Mondragon was pulled over earlier this month for making an illegal U-turn and was given a ticket for being a "non-English speaking driver."

The police chief said the citations are disappointing for Dallas, a city where the Latinos make up 44 percent of the more than 1 million residents and nearly 45 percent speak a language other than English.

"I was I guess surprised and stunned," Kunkle said. "We area very diverse community."

Kunkle said his department's computer system for citations has a pull-down menu that includes a law requiring drivers of commercial vehicles to speak English. The chief said he believes the federal law was misapplied to local drivers of private vehicles.

At least six officers wrote the citations, including one who wrote five of them, Kunkle said at a news conference. The officers and their commanders are under investigation, and Dallas police also plan to look beyond the last three years to see if other citations turn up, Kunkle said.

On Oct. 2, Mondragon was pulled over by Officer Gary Bromley, a rookie who was still under supervised training. He gave her a ticket for not speaking English along with citing her for making an illegal U-turn and failing to carry her drivers license.

"I wanted to tell him," Mondragon told The Associated Press in Spanish on Friday. "I couldn't talk back to him out of respect."

Mondragon was driving her 11-year-old daughter to school when Bromley stopped her. She had forgotten her purse with her license in it while darting out the door that morning after her daughter missed the school bus.

"I felt humiliated. Sad," she said. "I wanted to cry but I couldn't. The anger wouldn't let me."

During the exchange between her and the officer, Mondragon said she used the limited English words and phrases she knows.

"He asked me if I spoke English. I said I speak a little and understand it," she said.

Kunkle said the outcome of the other 37 no-English citations is unclear. Mondragon was surprised to hear others had been cited and said she's glad she said something so it can stop. She and her family are considering a lawsuit.

From now on Dallas police will not give commercial drivers tickets for being unable to speak English, Kunkle added, saying that was a job for other law enforcement agencies.

What do you think? Should Americans have to speak English in order to get a driver's license?