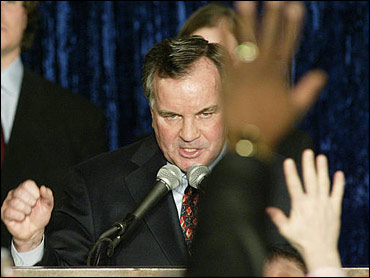 Richard M. Daley won a fifth term by more than a 5-to-1 margin over his closest challenger and vowed to continue what he called his life's work - running the city that his father once led.

The rout further solidified Daley's standing as one of the most popular politicians Chicago has ever seen. His popularity rivals that of his father, Richard J. Daley, who defined the Chicago Democratic machine in his 21 years as mayor.

Some say the mayor, who seldom faces any opposition from the City Council, holds too much power. What Daley calls coalition building, critics call machine politics.

But Daley scoffed at suggestions that he is too powerful.

Daley appeared to have won in each of Chicago's 50 wards in the nonpartisan election, crushing challenges from two black ministers - the Rev. Paul Jakes and the Rev. Joseph McAfee - and black businesswoman Patricia McAllister.

"I take pride in the fact that Chicago's united today, and that our victory was built in every community," Daley said.

With 97 percent of precincts reporting unofficial results, Daley had 79 percent, or 353,874 votes. Jakes, his closest challenger, had 14 percent, or 62,593 votes. The mayor needed to win a majority of the vote to avoid an April runoff.

Daley, 60, has been credited with improving schools, revitalizing downtown and beautifying the city since becoming mayor in 1989. He has easily beaten a succession of black politicians and community leaders in a city where blacks outnumber whites and Hispanics.

"He has a genius about being able to sense how the people feel about an issue and then decide on the issue the way they would want him to," said former Illinois Attorney General Neil Hartigan, a Democrat.

Daley emerged victorious after an unusually quiet campaign in a city known for its raucous politics.

"I want to thank you for giving me the opportunity to continue the work of my life, the work of making this great city even greater," Daley told supporters at a brief victory party.

The election came during a time of mourning for the city and the mayor's own family. Twenty-one people died in a nightclub stampede on Feb. 17, just a day after the death of Daley's 95-year-old mother, Eleanor "Sis" Daley.

Daley asked for a moment of silence during his victory speech in memory of the victims of the stampede as well as the 97 people killed Thursday in a Rhode Island nightclub fire.

Chicago Board of Elections spokesman Tom Leach said voter turnout Tuesday was expected to be about 34 percent, a record low for a municipal election. The previous low of 38.5 percent came in 1947.