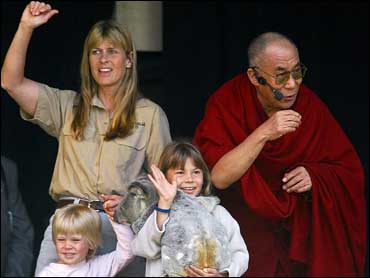 The Dalai Lama toured the zoo of late "Crocodile Hunter" Steve Irwin on Wednesday, where he thanked Irwin's family for its dedication to wildlife.

Delicately handling a Burmese python and petting a frisky koala, the spiritual head of the world's Buddhists visited Australia Zoo and addressed a sold-out crowd at its open-air, arena-style "Crocoseum."

The Dalai Lama's visit ended when American-born Terri Irwin, Steve's widow, and their children, Bindi and Bob, came on stage, with Bindi carrying a koala.

The last time the place was this full was nearly nine months ago during a memorial service for Steve Irwin, who died last September when the barb from a stingray pierced his chest while he was diving at the Great Barrier Reef.

The Dalai Lama, with his long traditional red robe flapping in the wind, received a standing ovation as took the stage at the Crocoseum. Some of the crowd who had paid up to $42 a ticket waved Buddhist prayer flags.

During his 30-minute address, the Dalai Lama criticized companies and organizations that "remain indifferent" to the rights of animals by experimenting on them.

He also spoke of the benefits of vegetarianism, and said he often used to buy animals to save them from slaughterhouses when he was a young man in Tibet.