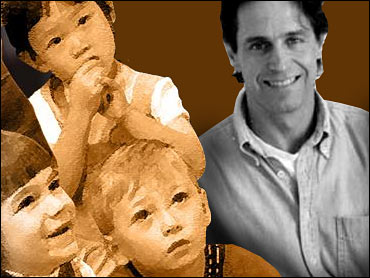 There's mounting research that interactions with a father are equally, if not more, important than interaction with a mother in a child's positive development.

On June 12, 2003, The Wall Street Journal addressed this issue, pooling information from various studies of children ranging from two to ten years old, following their development and how it is affected by contact with their parents.

This Father's Day weekend, The Saturday Early Show asked parenting contributor Mike Riera to analyze this research for us. Here are his answers to our questions:

Have we been overlooking a father's impact on early childhood development all these years?

I don't think we've been overlooking it but we have pushed it to the side with all the emphasis on the push-pull between full-time stay-at-home parents and working moms and dads. And with that said we haven't paid much attention to how dad's influence kids differently than moms.

What ages are we talking about that the father's influence starts to be really important?

From very early on. One study in Germany showed that dads who played with their two year olds in sensitive, supportive, and challenging ways had stronger relationships with the same kids between the ages of 10 and 16.

What are we finding out about why dad is so important to a baby's social development 5, 10, and 20 years down the line?

Quite a bit, kids less attached to their dads at age 5 were more anxious, withdrawn, and less self-confident at age 9, which translated to less acceptance by peers and less well-adjusted at school.

Another study provides the quintessential win-win situation for dads, moms, and kids. Recent research from UC Riverside shows that when fathers do housework with their children, their kids turn out to be better adjusted and more socially aware. Additionally, dads who do more housework generally have better sex lives with their wives, too.

How does this differ from a mother's influence?

Mom's influence has more to do with self-worth and the ability to form close, one-on-one relationships. Again, the results are that the relationships with dads and moms are different and complimentary.

Is a strong paternal influence more important to a person as a child, or as the child gets closer to adulthood?

Both. It affects their level of acceptance by peers as a child and their levels of confidence as they enter adulthood.

This information is based on many recent studies. Is this something that's been widely recognized inside the family counseling community for a while?

We've always known that dads play a big role, just weren't certain what kind of role and how it differed from the role of moms. Bottom line is that this lends support to families where both parents work less than full-time and both parents share parenting responsibilities, which maximizes both paternal and maternal influences on the child.

Are these findings across the board, or are their other circumstances that can be a factor such as how much a father works and income?

So how should we thank our fathers for all the extra help we didn't even know we were getting from them?

Pick up the phone or pen and reach out to them. Just let them know-nothing more, nothing less.