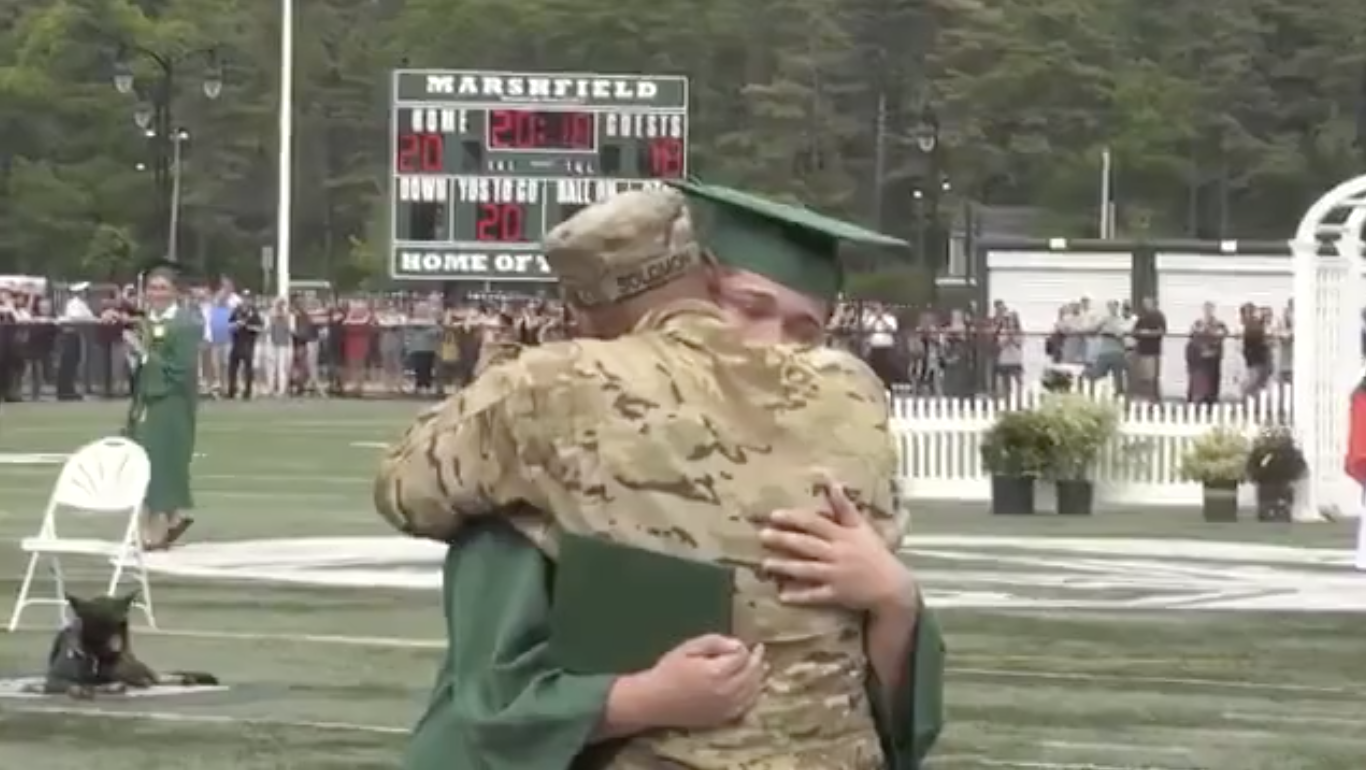 Tyler Solomon stepped onto the Marshfield High School football field on Saturday to graduate high school. Like all of the graduates, the announcer called his name, he stepped up to the podium and was handed his diploma.

Then, the announcer said something else specifically for Tyler: "Please join us in recognizing U.S. Army Sgt. Damon Solomon, who was granted special leave this weekend from his fifth deployment in Kosovo to celebrate Tyler's graduation."

The high school senior from Massachusetts was shocked. He looked out across the field and there was his dad, Sgt. Damon Solomon, who has been deployed overseas since January.

Tyler said it took him a few seconds to process what the announcer said. Then, he tearfully crossed the field to his dad and enveloped him in a huge hug.

"I had no idea my dad was there," Tyler told CBS News a day after the big surprise.

The elder Solomon said the look on his son's face made all the planning worth it. "The expression on his face was amazing. The shock, the emotion, the tears," Solomon told CBS News. He said he had been planning the surprise for about a month.

"We're only allowed a certain time of leave and only a certain amount of people are allowed to leave at a time," Solomon said. "I pitched this idea to my commander and first sergeant and they loved the idea."

He booked his plane tickets back home to Massachusetts and only told his girlfriend and mother. He also told the high school's principal, who he says helped coordinate the surprise. "They were more than accommodating. They ended up doing a lot of logistical work," he said.

Solomon said the hardest part of this surprise was keeping it a secret. "The hardest part about it all was i was trying so hard not to ruin the surprise. That was the biggest challenge because it was a big open field and it was hard to get out there stealthily."

Tyler wasn't the only person surprised by his father's return. Solomon's five other kids had no idea he was there. They were shocked to see their dad cross the field at their brother's graduation.

"Their reactions were emotional. They're a lot older now, so the pain is authentic. When they were younger, they didn't understand the concept of time, but they do now," Solomon said.

Solomon says he has been in the Army for 18 years and has been deployed five times. He's usually overseas for two to three years at a time.

Solomon is on leave for eight days -- six days at home and two travel days, he says. The family had a graduation party immediately after the ceremony, which Tyler's grandmother planned knowing his dad would be there for it.

The high school's student broadcasting group posted a video of Solomon's surprise and it has since gone viral. "We didn't expect the amount of recognition we have now. We've been on the phone all morning with interviews," Solomon said.

Both Tyler and his dad are glad so many people have seen the video. "Other families have been going through this with significant others overseas," Solomon said, adding that he wants people to "understand it's for the greater good, understand it hurts but there are moments, moments like these," for military families to enjoy. Tyler agreed: "It's about appreciation."

"People don't understand what vets and families have to got through when employed overseas. Although they're away, they do it for greater good to protect everyone," he told CBS News.

"I hope everyone has an opportunity like this," Solomon said.

The family says when everything quiets down, they're planning a crab boil to celebrate -- a Massachusetts classic and family tradition.