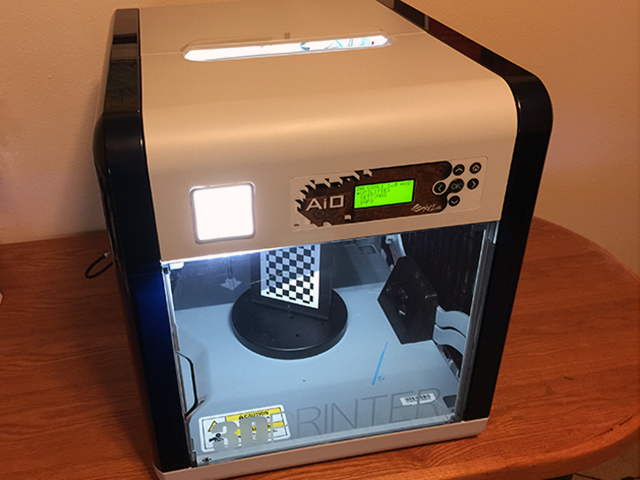 3D printers are going mainstream, with some printers available for under $1,000 now. But XYZprinting's Da Vinci 1.0 AiO sets a new bar -- for a modest $799, the AiO is both a printer and 3D scanner.

Of course, not everyone needs a 3D printer at the moment. But for businesses that want to rapidly prototype new products and individuals who are intrigued by the promise of printing objects as if they owned a Star Trek replicator, the AiO is a superb choice.

For starters, the printer is ready to go almost from the moment you unpack it. 3D printers have a well-deserved reputation for being finicky. Many require cumbersome calibration to work properly, while others save money by not heating the print bed, leading to unpredictable printing.

The AiO comes pre-calibrated and arrives carefully packed to keep it that way. After removing all the packing shims and tape, all you need to do is install a spool of plastic filament to make your first test print (a couple of test objects come pre-installed in the printer's memory).

The printer comes with minimal software -- a printing app and a scanning app. The printing app is basic, allowing you to import 3D objects for printing, change their scale, and flip them around, changing the side of the object that is face-down on the print bed for printing. You can't build or edit objects with the included software, though.

XYZprinting has its own modest library of printable objects, and you can import standard 3D objects, such as any from the popular Thingiverse site. After printing a few pre-made objects, I decided to try my hand at object creation, and found the free and web-based Tinkercad to be powerful (and novice friendly) enough to design practical objects with a minimal learning curve.

Printing is a delightful experience. AiO has a relatively large print bed, capable of rendering objects up to 7.8 inches square. Unlike most printers, the filament comes not on a bare spool, but in a cartridge that resembles a giant inkjet printer cart. It holds 600 grams of ABS plastic with a sensor so the printer can track how much is used and if there's enough to print your next job. My print jobs ran anywhere from about one to five hours, depending upon the print size, and prints were generally error-free.

Only one design (of my own creation) kept failing, until I realized I could print it with a different orientation so the print head didn't damage a long, vulnerable pillar in my design during the print process. The reality of 3D printing in 2014 is that you should expect some trial and error to get the results you want.

Scanning was something else altogether. Even after using the calibration target that came with the printer, I found that the AiO was not very good at scanning everyday objects; it seems to work best with a narrow range of monochromatic objects with specific physical characteristics. Except for a test object XYZprinting supplied for testing, few of my scans came out the way I hoped, with most suffering from ugly discontinuities and long unintended extrusions, as if the whole object was made of wet taffy. And the resolution seems relatively low, with small details completely lost in the scan. When it works, though, it's exhilarating to be able to scan and object and then print it, as if the AiO were a (blurry) 3D photocopier.

Unfortunately, the printer cartridges may be a sticking point for budget-conscious users. By building the plastic filament into proprietary cartridges, XYZprinting is able to follow the 2D printer market's model of overcharging for consumables. You'll pay $28 per 600 grams, which works out to about 4.6 cents per gram (a more typical cost for plastic filament is closer to 2 to 4 cents per gram). To be clear, replacement filament isn't egregiously expensive, but that price difference will add up over time. The filament comes in a wide variety of colors, but you can't swap them during the print process to make multi-colored objects.

The bottom line is that the da Vinci 1.0 AiO is an impressive -- perhaps even groundbreaking -- printer. Among a crowded field of printers from established companies and upstart Kickstarter campaigns, XYZprinting's da Vinci 1.0 AiO is an affordable, reliable and easy-to-use printer that also does some 3D scanning.