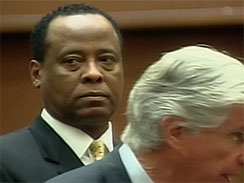 LOS ANGELES - Prosecutors on Monday said that defense attorneys for the doctor charged in Michael Jackson's death can have half the residue left in syringes and other medical items found in the star's bedroom for testing by a private laboratory.

"The people ask that the defense be given one-half of the medical evidence so that they can hire and pay for their own defense-requested testing," according to a motion filed by prosecutors, in response to a request by Dr. Conrad Murray's lawyers seeking the tests.

Murray has pleaded not guilty to involuntary manslaughter in the pop star's death by acute propofol intoxication on June 25, 2009. Propofol is an anesthetic.

The doctor's defense team wanted the coroner's office to conduct testing on fluids in two syringes and an IV bag found in Jackson's rented mansion. They want to determine how much propofol and painkiller lidocaine were in the items.

Murray's attorneys have struck an urgent tone regarding the need to test the medical items, saying the evidence was deteriorating. They described the fluids in one of the syringes as having turned to "salt" and contended the testing should have been done immediately after Jackson's death.

The contentious motion filed by Deputy District Attorney David Walgren disputed the defense's statements, and said prosecutors will agree to tests only if they are done correctly.

Coroner's officials have said in court filings that the testing was not necessary to determine Jackson's cause of death.

Superior Court Judge Michael Pastor has said testing is not needed to determine if there is enough evidence to order Murray for to stand trial.

Pastor will hear the arguments on the tests on Wednesday — six days before Murray is scheduled to appear for a preliminary hearing to determine if there is enough evidence for the cardiologist to stand trial.

In the motion filed Monday, Walgren said that if the tests were performed by the coroner's office, defense attorneys should be required to sign an acknowledgment that they understand the coroner will be using an experimental procedure; that the interpretation of data will be difficult; and that the testing could consume or alter the evidence.

Walgren also accused the defense of making false allegations that they had not received relevant toxicological evidence. He said they have had the evidence since Feb. 16, 2010.

He cited the allegations as the reason he is seeking written court orders to validate all further testing.