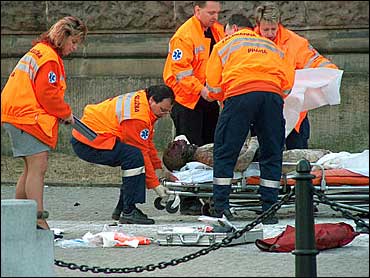 It's a troubling trend in a country with a fiery past: Young, despondent Czechs committing suicide by setting themselves ablaze.

According to Czech media, five have died and 11 others attempted suicide but survived. The wave of burnings has revived painful memories of two students whose death by self-immolation in 1969 came to symbolize resistance to the communist regime of the time.

Jan Palach, and Jan Zajic a month later, were protesting the public apathy that followed the 1968 Soviet-led invasion to oust a reformist Marxist government in then-Czechoslovakia.

"They did it to shake up the conscience of this nation," said Dr. Jaroslava Moserova, a senator and a burns specialist. "Back then, their deaths were viewed with deep respect. ... Everybody admired them and all understood why they did it."

But the latest ones, 14 years after communist rule was overthrown, are baffling.

Prague psychologist Karel Humhal, who has been studying the cases, refuses to link them to the deaths under communist rule.

"In a way, Palach's act was appropriate for that era...," he said. "These others express nothing."

In March, troubled teenager Zdenek Adamec doused himself with gasoline and lit a match in Prague's central Wenceslas Square — just a few steps from the spot where Palach set himself on fire.

Screaming onlookers tried to rescue Adamec, but he died 40 minutes later in an ambulance.

In a letter left behind, he said communism had been replaced by a democracy that amounted to nothing more than "the rule of officials, money, and treading on people." He could no longer live, he said, in a world filled with violence, pollution and apathy.

While there are no official statistics on suicide attempts by fire for this year, the numbers reported by Czech media equal the number of such fatalities over the previous decade.

Although psychological problems and despair over failed romances appear to have been the deciding factor in most cases, the sheer number alarms authorities.

President Vaclav Klaus went so far as to call on Czechs to prevent further tragedies and respect life as a gift.

"I know that our world is complicated — that life is often painful, and often to many of us it may appear that we can't cope with it all," Klaus wrote in a recent open letter. "But I consider this kind of manifestation ... to be very unhappy, inappropriate and most of all unnecessary."

The suicide attempts come as Czechs struggle to shed the last of their communist legacy, revive a sluggish economy and qualify for membership in the European Union next year. Even so, experts seem at a loss to explain the new spate of self-immolations.

Adamec's suicide may have triggered a "copycat" phenomenon, some law enforcement officials say.

Five days after his death, a mentally unstable 21-year-old man was critically injured after setting himself on fire. Police spokesman Stanislav Dobes told Czech media that according to the victim's father, the young man had seen a newspaper account of Adamec's suicide, "which could have inspired him to do what he did."

Neither Humhal nor Moserova would discount the powerful effect of Palach's communist-era suicide on those considering taking their own lives a generation later.

"It drew such great attention," Moserova said. "People who find themselves in situations without a solution ... opt for this form because it is so dramatic and attracts attention."

Retiree Ludmila Kolarova, standing at Wenceslas Square on a recent morning, blamed the weak economy, in which unemployment is running at 10 percent and the average monthly salary is just $580.

"Even though everything is available, many do not have money or are jobless, " she said.

But Karel Lomberk, 63, said today's troubles pale next to the repression that Czechs like Palach and Zajic endured under the communists.

"Nobody should complain about bad living conditions," he said. "People should be happy to even eat out of trash cans, as they can do that in freedom."