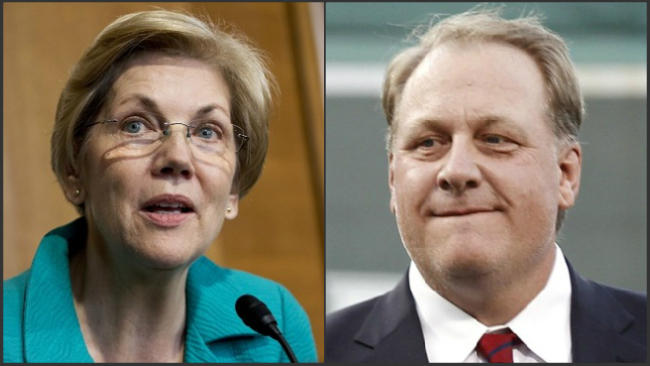 CBS Providence affiliate WPRI reports Schilling made the announcement on a local call-in radio show while also defending his failed video game business in the state.

“I’ve made my decision. I’m going to run,” Schilling said during an interview on WPRO-AM. “But – but – I haven’t talked to Shonda, my wife. And ultimately it’s going to come down to how her and I feel this would affect our marriage and our kids.”

Shonda herself later called in to the show saying she wasn’t sure if she’d allow it.

In August, Schilling said he wanted to eventually run for the White House, and that getting elected to a state office was the first step in that plan.

Schilling would present voters with a stark contrast if he challenges the liberal darling Warren.

Schilling is known for his conservative leanings and social media rants about politics. In April, Schilling was fired from his position as an analyst with ESPN, which he held since 2010, because of a controversial Facebook post about North Carolina’s “bathroom bill.”

“A man is a man no matter what they call themselves. I don’t care what they are, who they sleep with, men’s room was designed for the penis, women’s not so much. Now you need laws telling us differently? Pathetic,” Schilling stated in the April post.

Once a former Ben Carson supporter, Schilling pledged his official support to Trump in May, when he penned a 1,500-word blog post laying out reasons why he would eventually cast his vote for the real estate mogul.

“I trust him. I don’t agree with him on many things, that’s cool,” he said in the blog. “I also know that there is and never will be a candidate anywhere that I will agree with on everything. That candidate doesn’t exist.”